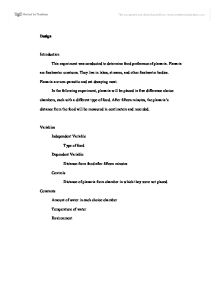 This experiment was conducted to determine food preference of planaria. Planaria are freshwater creatures. They live in lakes, streams, and other freshwater bodies.

Design Introduction This experiment was conducted to determine food preference of planaria. Planaria are freshwater creatures. They live in lakes, streams, and other freshwater bodies. Planaria are non-parasitic and eat decaying meat. In the following experiment, planaria will be placed in five difference choice chambers, each with a different type of food. After fifteen minutes, the planaria's distance from the food will be measured in centimeters and recorded. Variables Independent Variable Type of food Dependent Variable Distance from food after fifteen minutes Controls Distance of planaria from chamber in which they were not placed Constants Amount of water in each choice chamber Temperature of water Environment Materials Five choice chambers 500 mL of room temperature, distilled water 200 mL beaker Pipet 20 planaria Apple Liver Aquatic plant Potato Ruler Timer Procedure 1. ...read more.

Obviously, anything that is not their preferred food would be chosen less often. Errors While the results were expected, there is still a possibility of errors. One mistake was that the blood of the liver spread through the water into the other chamber. This may have given the planaria a taste for the liver and led them toward it. Measurements are always subject to errors, because there are many things that can go wrong. There is the uncertainty that is always calculated in when considering measurement and data. In addition to this, because all of the trials were done at the same time, there is a possibility that the planaria moved before the experimenter had time to move farther than if they had been measured immediately after the fifteen minutes. This was a major error, and should have been controlled for. This error could have caused the results to be swayed extremely. ...read more.