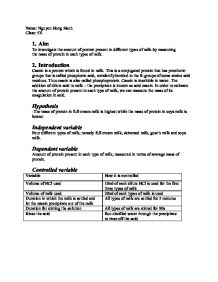 Protein's solubility decreases in milk and precipitates present in the solution. Additionally, it is left in one day, it allows the milk to sour, thus the lactic acid produced precipitates the casein. 8. Conclusion -The mass of protein in full cream milk is highest while the mass of protein in soya milk is lowest. This agrees with the hypothesis proposed for the investigation. However, my results do not support the hypothesis because of some limitation or weakness. 9. Evaluation Limitation/weakness Evaluation of limitation/weakness Suggestion for improvement Instrument used in measuring the mass of casein Limited precise of balance (only 0.1g). Smaller change in the mass cannot find out Use a balance that has a greater precise - up to 0.001g Short of duration to allow the precipitate out of the milk (5 minutes) 5 minutes may not be long enough for precipitate out of the milk. Increase the duration for allowing the precipitate out of each type of milk to 15 to 25 minutes Using different types of filter (cheese cloth and filter paper) Using different filter, causing the significant change between the mass of protein present in 4 types of milk Using one type of filter (cheese cloth or filter paper) Data comes from different results Some of readings minus the cheese cloth or filter paper, or some of readings did not Must use the identical result, ex: all the data minus the cheese cloth or all the data did not minus. 10. ...read more.