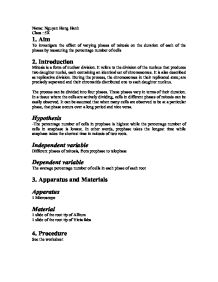 Name: Nguyen Hong Hanh Class : 5X 1. Aim To investigate the effect of varying phases of mitosis on the duration of each of the phases by measuring the percentage number of cells 2. Introduction Mitosis is a form of nuclear division. It refers to the division of the nucleus that produces two daughter nuclei, each containing an identical set of chromosomes. It is also described as replicative division. During the process, the chromosomes in their replicated state; are precisely separated and their chromatids distributed one to each daughter nucleus. The process can be divided into four phases. These phases vary in terms of their duration. In a tissue where the cells are actively dividing, cells in different phases of mitosis can be easily observed. It can be assumed that when many cells are observed to be at a particular phase, that phase occurs over a long period and vice versa. Hypothesis -The percentage number of cells in prophase is highest while the percentage number of cells in anaphase is lowest. In other words, prophase takes the longest time while anaphase takes the shortest time in mitosis of two roots. ...read more.

Conclusion -The percentage number of cells in prophase is highest in four phases and the percentage number of cells in anaphase is lowest in four phases of two roots in mitosis. Hence, prophase takes the longest time and anaphase takes the shortest time in mitosis. This agrees with the hypothesis proposed for the investigation. 8. Evaluation There are various weaknesses and limitations observed in the investigation. They are summarized in the following table together with suggestions for their improvements. Limitation/weakness Evaluation of limitation/weakness Suggestion for improvement Some of cells may be washed away along the process Some of cells may be washed away the chromosomes which is used to recognize the cell in which phase during preparing the root tip slide because the slide is cut very thin and stained with color Repeat the experiment with different slides of each root tip to take the average to minimize the random error when the chromosomes washed away. The area of observation is narrow Select an area of at least 50 dividing cells in the root tips, leading to obtain a significant difference in the number of cells in each stage The area need to be widened to at least 100 or 150 cells. 9. ...read more.