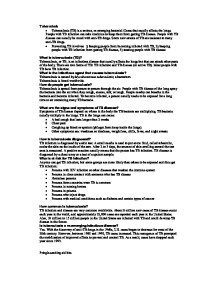 Tuberculosis (TB) is a serious, re-emerging bacterial illness that usually affects the lungs. People with TB infection can take medicine to keep them from getting TB disease.

TB bacteria usually multiply in the lungs. TB in the lungs can cause: * A bad cough that lasts longer than 2 weeks * Chest pain * Coughing up blood or sputum (phlegm from deep inside the lungs) * Other symptoms are: weakness or tiredness, weight loss, chills, fever, and night sweats How is tuberculosis diagnosed? TB infection is diagnosed by a skin test. A small needle is used to put some fluid, called tuberculin, under the skin on the inside of the arm. After 2 to 3 days, the amount of skin swelling around the test area is measured. A positive reaction usually means that the person has TB infection. ...read more.