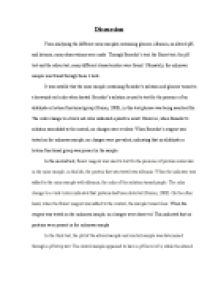 Urinalysis Lab. From analyzing the different urine samples containing glucose, albumin, an altered pH, and ketones, many observations were made.

﻿Discussion From analyzing the different urine samples containing glucose, albumin, an altered pH, and ketones, many observations were made. Through Benedict?s test, the Biuret test, the pH test and the odour test, many different characteristics were found. Ultimately, the unknown sample was found through these 4 tests. It was notable that the urine sample containing Benedict?s solution and glucose turned to a brownish-red color when heated. Benedict?s solution is used to test for the presence of an aldehyde or ketone functional group (Gurien, 2008), in this test glucose was being searched for. The color change to a brick red color indicated a positive result. However, when Benedict?s solution was added to the control, no changes were evident. When Benedict?s reagent was tested on the unknown sample, no changes were prevalent, indicating that no aldehyde or ketone functional group was present in the sample. ...read more.

This result explains that the unknown sample must have had an altered pH level. Lastly, the odour of the ketone sample and control sample was wafted and smelled. The smell of the sample containing ketones was similar to the smell of a nail polish remover solution. The tangy smell was a positive result for the presence of ketones. However, the control sample was odourless. In addition, the unknown sample was odourless, therefore no ketones were present in the sample. Furthermore, the lab confirmed the reactions of Benedict?s and Biuret reagents found through previous research and experiments performed by scientists such as Ferdinand Rose and Stanlet Rossiter Benedict. Ferdinand Rose stated that the biuret reagent can be used to detect the presence of peptide bonds; the copper (II) ion is reduced to copper (I) which forms a complex with the nitrogen?s and carbon?s of the peptide bonds in an alkaline solution causing it to turn violet in the presence of proteins (Sastry, 2010). ...read more.

This issue can result in uncertainty. A more precise way of identifying a sample as one that contains ketones should be used. Ketone strips just like the pH strips can be used the next time this lab is conducted so the investigator can be certain about the presence of ketones in the unknown sample. The ketone test strips (Figure 1.1) sold at local pharmacies are used for searching for ketones in urine samples and by using the strips, a quantitative result can be found. Another source of error could have been that one may have detected different proteins in the Biuret test. Since the Biuret test detects peptide bonds, any type of protein could have been detected. It does not necessarily mean that albumin had been detected. To fix this, an albumin testing kit could have been used to detect albumin and it?s concentration. By using an albumin testing kit (Figure 1.2), a quantitative result can be found. Figure 1.1 Figure 1. ...read more.