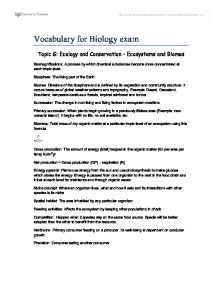 Vocabulary for Biology exam Topic G: Ecology and Conservation - Ecosystems and Biomes Biomagnifications: A process by which chemical substances become more concentrated at each tropic level. Biosphere: The living part of the Earth. Biomes: Divisions of the biosphere and is defined by its vegetation and community structure. It occurs because of global weather patterns and topography. Example: Desert, Grassland, Scrubland, temperate deciduous forests, tropical rainforest and tundra. ...read more.

trapped in the organic matter (KJ per area per time) KJ/m2yr Net production = Gross production (GP) - respiration (R) Energy pyramid: Plants use energy from the sun and use photosynthesis to make glucose which stores the energy. Energy is passed from one organism to the next in the food chain and it lost at each level for maintance and through organic waste Niche concept: Where an organism lives, what and how it eats and its interactions with other species is its niche Spatial habitat: The area inhabited by any particular organism. ...read more.

Herbivore: Primary consumer feeding on a producer. Its well-being is dependent on producer growth. Predation: Consumer eating another consumer Parasitism: An organism which lives on or in a host and depends on the host for food for at least part of its life Mutualism: Two organisms living together where both organisms benefit from the relationship Fundamental Niche: Complete range of biological and physical conditions under which an organism can live based on its adaptations Realized niche: (narrower niche): The way of living this results from adaption and competition with other species. ...read more.