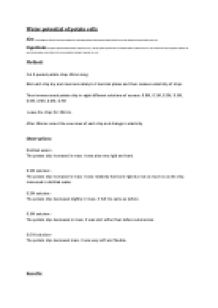 ﻿Water potential of potato cells Aim: To investigate the effect of varying concentration of a certain sugar solution on the amount of osmotic activity between the solution and a potato chip of a given size. Hypothesis: The potato chips left in dilute solutions will increase in size, while the potato chips left in the concentrated solutions will decrease in size. This is because the water in hypotonic solutions will move into the potatoes (where there is a lower concentration) increasing its mass and vice-versa. Method: Cut 8 peeled potato chips 30mm long. Blot each chip dry and mass accurately to 2 decimal places and then measure elasticity of chips. Then immerse each potato chip in eight different solutions of sucrose: 0.0M, 0.1M ,0.2M, 0.3M, 0.4M, 0.5M, 0.6M, 0.7M Leave the chips for 30mins. After 30mins record the new mass of each chip and change in elasticity Observations: Distilled water:- The potato chip increased in mass. ...read more.

These are mainly random errors which are caused by mistakes made while handling or reading equipment. These are the main reasons for the error bars on the graph of my data. Special care was taken to ensure that the experiment was a fair test. All the chips were kept the same size, reducing any differences in absorbency due to surface area. The flexibility of chips was tested after they had been weighed to provide us with qualitative data. To improve this experiment a wider range of concentrated solutions could be used to produce more varied results that would highlight, more clearly and accurately, the concentration of the solution inside potato cells. We could have also measured the width and depth of each chip and could have tried to maintain a consistent surface area: volume ratio for all the chips. We could also have measured any change in length of the chips as an extra set of data to analyse. Overall, this experiment was quite accurate and successful in investigating the process of osmosis and concluding that the concentration of sucrose inside a potato cell is somewhere between 0.1M and 0.2M. ...read more.