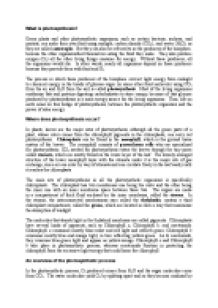 ﻿What is photosynthesis? Green plants and other photosynthetic organisms, such as certain bacteria, archaea, and protists, can make their own food using sunlight, carbon dioxide (CO2), and water (H2O), so they are called autotrophs. But they can also be referred to as the producers of the biosphere, because the other organismsfeed themselves eating the food they make. They also produce oxygen (O2) all the other living things consume for energy. Without these producers, all the organisms would die. In other words, nearly all organisms depend on these producers because they provide them with food and O2. The process in which these producers of the biosphere convert light energy from sunlight to chemical energy in the bonds of glucose sugar (or some other food molecule) using CO2 from the air and H2O from the soil is called photosynthesis. Most of the living organisms synthesize fats and proteins digesting carbohydrates to store energy, because of that glucose produced by photosynthesis is a main energy source for the living organisms. Thus, life on earth relies on this bridge of photosynthesis, between the photosynthetic organisms and the power of solar energy. Where does photosynthesis occur? In plants, leaves are the major sites of photosynthesis, although all the green parts of a plant, whose color comes from the chlorophyll pigments in the chloroplasts, can carry out photosynthesis. ...read more.

At the same time, these hydrogen ions are added to the CO2 while it is reduced to sugar as electrons. Such processes, where oxidation and reduction follows each other, are called redox processes. So photosynthesis involves a series of redox reactions, in which the result of the first reaction is used in the next reaction. Photosynthesis occurs mainly in two stages, one being the light reactions and the other Calvin cycle. In the light reactions, light energy is converted into chemical energy, producing O2 as a waste product, whereas in Calvin cycle, sugar molecules and energy-containing products of the light reactions are formed. Light Reactions The light reactions start with the chlorophyll pigments in chloroplasts absorbing light energy. The pigments absorb light energy as a photon, which is a certain amount of light energy. When a photon is absorbed by a pigment molecule, one of the electrons of this particular pigment becomes excited. This excited electron is passed onto the neighboring molecule, which is called the primary electron acceptor. Although there are 200-300 pigment molecules in the thylakoid membrane of each chloroplast, only one Chlorophyll a molecule gives off excited electrons to its neighbor. This Chlorophyll a molecule and its primary electron acceptor are called the reaction center. ...read more.

The Calvin cycle The Calvin cycle uses carbon from CO2, energy from ATP, and electrons from NADPH to form an energy-rich sugar molecule called glyceraldehyde-3-phosphate (G3P.) The reactions start with carbon fixation, where three molecules of CO2 is combined with three molecules of a five-carbon sugar which is called ribulose bisphosphate (RuBP) by an enzyme called rubisco, resulting with six molecules of 3-phosphoglyceric acid (3-PGA) which is a three-carbon organic acid. Then six molecules of ATP gives off energy and this energy consumed is used in oxidizing six molecules of NADPH. At the same time 3-PGA is reduced and the result is six molecules of G3P which is an energy-rich three-carbon. One of these six molecules is released as the main product of photosynthesis, while the other five remain in the cycle. The atoms of these remaining molecules are rearranged to form three RuBP molecules so another turn of the cycle starts. One molecule of sugar is made up of two G3P molecules. But one cycle deals with only one CO2 molecule (one carbon at a time). So it takes six complete cycles to make one glucose molecule, since one glucose molecule has six carbons. The Calvin cycle is also referred to as dark reactions, because it does not require light. But still, it does need the ATP and NADPH the light reactions produce. So it cannot occur during night. ...read more.