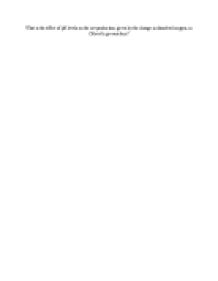 What is the effect of pH levels on the net production, given by the change in dissolved oxygen, in Chlorella pyrenoidosa?

﻿What is the effect of pH levels on the net production, given by the change in dissolved oxygen, in Chlorella pyrenoidosa? ________________ Introduction: Chlorella pyrenoidosa is a special type of green micro algae that grows in fresh water, and is common throughout much of the world[1]. In this experiment, the species pyrenoidosa is the Norton Lake 170 variation was cultured ex situ. Chlorella pyrenoidosa has a reproductive cycle of about 2 days and is known for its high yield rate, where one parent cell divides into 4 daughter cells daily[2]. Furthermore, it is considered to have the highest chlorophyll concentration of any known plant (about 28.9g/kg) and is used for health benefits[3]. Chlorella pyrenoidosa, because of its high concentration of chlorophyll, has an overall pH optimum at around pH 8, while it is found usually in environments with pH ranges 6-7. Oxygen is critical to the maintenance of life processes of nearly all organisms. Its concentration in the air and water is dependent upon chemical processes but even more so on the biological processes like photosynthesis and respiration. Primary producers like the phytoplankton Chlorella pyrenoidosa are generally photosynthesizers and yield a gross productivity in oxygen while using some oxygen produced from hydrolysis of water in respiration. The result is generally a positive net production of dissolved oxygen levels (when isolated samples of photosynthetic organisms are used)[4]. Therefore, dissolved oxygen becomes an important measure of water quality and health of a population of species. Acid rain and industrial pollution has caused pH changes in the environment since the Industrial Revolution, and pH must be stable in order to keep integrity of protein) secondary and tertiary structures from polar interactions. Moreover, large pH fluctuations may be disastrous for O2 evolving thylakoid membranes of chloroplasts, or inner membranes in mitochondrion, affecting total net production rates. But then the question becomes, to what pH level can Chlorella pyrenoidosa be tolerant and yield higher net production values? ...read more.

Thus, switching this pH buffer to a pH 8 buffer without phosphate, like Tris (hydroxylmethyl) aminomethane-Hydrochloric acid would allow for the eradication of the limitating nutrients as potentially confounding factors for net production. Moreover, it would be important to understand that as temperature was not controlled (rather only monitored) there is a confounding factor in that a general temperature increase results in the decrease of oxygen saturation. To obtain generally more reliable data, it would be good to control temperature (by perhaps warming up the BOD bottles with pH buffer solution to 300C to obtain equal initial and final temperatures) from final to initial DO measurements so that change in DO saturation more accurately reflects the net production of Chlorella pyrenoidosa. An extended time period (that is a longer time period for the experiment to run), perhaps with collection of data over intervals of 24 hours over a 96 hour period (or 4 days), would allow for a clearer image of the data trend because the Chlorella pyrenoidosa would have more potential growth and would undergo enough division to see very large changes in final and initial DO concentrations and thus percent DO saturations. Moreover, an extended period of time would allow for the trials to not be run simultaneously, averting possible issue of sample cross-contamination. ________________ [1]Source [2] Source [3] Source [4] Source [5] Source for info. It must be noted that the pH for each enzyme found in Chlorella pyrenoidosa, but the importance here is that the pH optimum for the organism as a whole (as found by the industrial process in mass production of cultured Chlorella pyrenoidosa) was at pH 8. [6] Kott, Y., Hershkovitz, G., & Shemtob, A. (1966). Algicidal Effect of Bromine and Chlorine on Chlorella pyrenoidosa. Applied and Environmental Microbiology, 14(1), 8-11. [7]Note: Meaning that more acidic pH values of 6 and neutral pH of 7, still under the optimum of pH 8 were found to be having less net production loss than Chlorella pyrenoidosa in the more alkaline environments. ...read more.