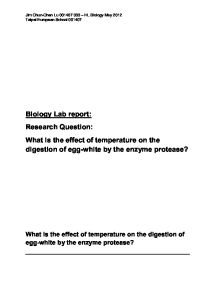 What is the effect of temperature on the digestion of egg-white by the enzyme protease?

affects the accuracy of the measurement hence the accuracy of the results. This can be solved by first drying most of the moisture with a paper towel then allowing it to air dry for the same amount of time thus ensuring the measurements are accurate. Thirdly, the amount of time the egg was digested for varied. This was due to the large sample size it was difficult to start all of the reactions at the same time i.e. to put the egg white into the enzyme solution all at the same time. This however, could be solved by having more help for starting and ending the experiment. Fourth, the data collected does not clearly show at which specific temperature protease works best under. To get the definitive and more exact optimum temperature, a larger data set will be needed that both increases the number of trials per temperature as well as the number of temperatures tested. Random errors I have experienced include the quality of the protein in the egg white samples as well as the quality of the enzyme solutions. Both of these random errors may have caused the fluctuations in the results. The quality of the egg white samples could be standardized by scrambling the egg whites of many eggs before cooking hence making all samples consist of the same egg white. The quality of enzyme solution could be controlled by using only one batch of chemical and making sure it is of hi quality. ?? ?? ?? ?? Jim Chun-Chen Lu 001407 033 - HL Biology May 2012 Taipei European School 001407 ...read more.