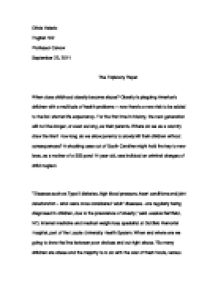 When does childhood obesity become abuse? Obesity is plaguing Americas children with a multitude of health problems

Olivia Valerio English 102 Professor Canow September 22, 2011 The Explatory Paper When does childhood obesity become abuse? Obesity is plaguing America's children with a multitude of health problems -- now there's a new risk to be added to the list: shorter life expectancy. For the first time in history, the next generation will not live longer, or even as long, as their parents. Where do we as a country draw the line? How long do we allow parents to slowly kill their children without consequences? A shocking case out of South Carolina might hold the key to new laws, as a mother of a 555 pond 14 year old, was indicted on criminal charges of child neglect. "Diseases such as Type II diabetes, high blood pressure, heart conditions and joint deterioration - what were once considered 'adult' diseases - are regularly being diagnosed ...read more.

12.5 million U.S. children are obese making the average of 19-24% of obese children per state, Louisiana has a percentage rate of 41% of its children being obese. (Rogers) Can we really perceive obesity for more than what it is- other than just fats kids? Many disagree saying that obesity is in no way correlated to abuse. Many parents strike out saying not fulfilling their children's demands for food is indeed abuse or neglect. Dr. Michael Fitzpatrick states that " child obesity is not abuse its a medical condition". Many people feel that they cannot always control when and what their children eat. Many mothers feel that schools poor menus also lead to their children's weight issues. Paulette a mother of an 11 year old boy weighing 145 pounds says that her son has no self control and questions how that is her problem. ...read more.

There has also been a lot of talk about the government taxing high sugar, high in fat foods. Matt Wilson author of "No fat tax" states " I don't want the government dictating what I should and shouldn't buy or raising it's tax, in an attempt to price push certain things out of budget". Dr. Kay Barney a family practices physician states " Its essential to educate not persecute" when it comes to obesity in children, diet and exercise can be the key to reverse the damage that's been done. Child obesity is without a doubt becoming an epidemic and whether or not its abuse is in the eyes of the beholder. As parents we must take control and educate not only ourselves but also our children. In doing our part I believe that we can conquer the obesity epidemic of America. As well as help guide these children off of the self destructive path they follow. ...read more.