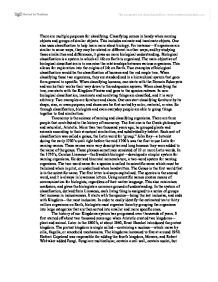 Why do we classify

There are multiple purposes for classifying. Classifying comes in handy when naming objects and groups of similar objects. This includes animate and inanimate objects. One also uses classification to help learn more about biology. For instance-if organisms are similar in some ways, they may be related or different in other ways; and by studying these similarities and differences, it gives us more biological understanding. Biological classification is a system in which all life on Earth is organized. The main objective of biological classification is to examine the relationships between various organisms. This allows for exploration into the origins of life on Earth. Two examples of biological classification would be the classification of humans and the red maple tree. When classifying these two organisms, they are standardized in a hierarchical system that goes from general to specific. When classifying humans, one starts with the Domain Eukaryota and works their works their way down to the subspecies sapiens. ...read more.

This also minimizes confusion, and gives the biologists a common ground of understanding. In the system of classification, derived from Linnaeus, each living thing is assigned to a series of groups that increase in inclusiveness. It starts with the species-being the last inclusive, and ends with Kingdom-the most inclusive. In order to easily identify the estimated ten to thirty million organisms on Earth, biologists must organize them by grouping the organisms into large categories that are then sorted into smaller and more specific ones. The history of our Kingdoms system has progressed over thousands of years. It first started off about two thousand years ago when Aristotle created two kingdoms-plant and animal. Later in the 1800's, at about 1860, Ernst Haeckel introduced the protest kingdom. The protest kingdom is single celled-containing a nucleus-which move by cilia, flagella, or amoeboid mechanisms. The kingdoms increased to five at around 1950. Herbert Copeland was responsible for adding the fourth kingdom, Monera; and Robert Whittaker added Fungi. Fungi are multicellular, contain a cell wall, contain nuclei, but have no chloroplast. ...read more.

Scientists have adopted the endosymbiosis theory proposed by Lynn Margulis in 1966 to explain the origins of mitochondria. It states that mitochondria are the descendents of symbiotic aerobic eubacteria. Mitochondria and also chloroplast have evolved through the process of endosymbiosis. It is said that bacteria entered large cells as parasites or undigested prey and began to live and perform cellular respiration and photosynthesis. Through all of this, we see just how much cells have evolved. People classify because it is handy to have names for objects and groups of similar objects. It also helps to give scientific names because they are standardized. As the years progress, new advances in technology could help better classify organisms. If new computer programs are generated, information about the organisms can be put in one program for the world to see. This could prevent people from thinking they discovered a new organism and having a let down. Also as new organisms continue to grow, evolve, and developed, we may be forced to add a new kingdom. We do all this to make properties easier to study. ...read more.