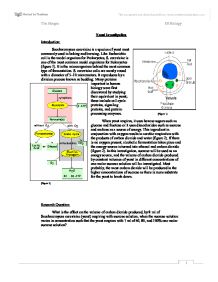 Yeast Investigation Introduction: Saccharomyces cerevisiae is a species of yeast most commonly used in baking and brewing. Like Escherichia coli is the model organism for Prokaryotes, S. cerevisiae is one of the most common model organisms for Eukaryotes (figure 1). It is the microorganism behind the most common type of fermentation. S. cerevisiae cells are mostly round with a diameter of 5-10 micrometers. It reproduces by a division process known as budding. Many proteins important in human biology were first discovered by studying their equivalent in yeast; these include cell cycle proteins, signaling proteins, and protein-processing enzymes. (Figure 1) When yeast respires, it uses hexose sugars such as glucose and fructose or it uses disaccharides such as sucrose and maltose as a source of energy. This ingredient in conjunction with oxygen results in aerobic respiration with the products of carbon dioxide and water (figure 2). If there is no oxygen present, alcoholic fermentation takes place and the energy source is turned into ethanol and carbon dioxide (figure 2). In this investigation, sucrose will be used as an energy source, and the volume of carbon dioxide produced by constant volumes of yeast in different concentrations of one molar sucrose solution will be investigated. Most probably, the most carbon dioxide will be produced in the higher concentrations of sucrose as there is more substrate for the yeast to break down. ...read more.

There are, however, some limitations and weaknesses in the method of this investigation. Firstly, the volume of yeast used was not constant throughout the different trials. The reason for this was as the trials took so long, the yeast had to be mixed with water anew in for the second trial as to minimize the amount of dead cells that accumulate over time. An improvement for this would include setting up all the trials simultaneously rather than after one another, and therefore using the same culture of yeast in all trials. Secondly, the volume of carbon dioxide would increase if the side arm test tube were shaken. This results in the data being a mixture of shaking and non shaking, as the samples could not be shaken the whole time. To improve this, the samples should either not be shaken at all, or they should be placed on a vibrating platform for the duration of the experiment to ensure the constant shaking of the samples. Lastly, the environment in which the respiration took place did not remain constant as the laboratory was vented by opening windows and temperature, consequently, pressure changed with that resulting in no constant experimental environment. This could be improved by placing the side arm test tube and its respiring contents into a calorimeter such that the internal environment does not fluctuate as violently as the external one. ...read more.