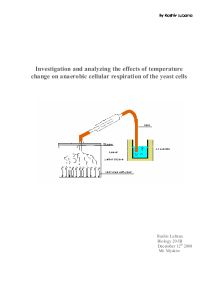 Health of the yeast cells should be fairly similar. They both should be healthy in terms of producing ATP. Same and good quality of test tubes and water tubes should be taken in order to prevent the breaking and tearing respectively. Time is the biggest controlled variable, which has to control to get the amount of carbon dioxide. Pressure is maintained throughout the lab. Same kinds of rubber knobs are used. Design: ATP and CO2 are both the products of cellular respiration. It is not easy to find the amount of ATP produced during cellular respiration. So measuring the amount of carbon dioxide produced during anaerobic respiration will indirectly allow the experimenter to find the amount of ATP produced by the yeast cell. Samples of the yeast will be taken from the same location. Sucrose will be added to them and will be kept in different temperature for a particular time. Carbon dioxide will be collected in the water tube and the volume of carbon dioxide will be found with the Ideal gas law. Materials required: In order to complete the experiment some materials are required. Safety goggles, apron and oxygen mask for safety. To take the yeast samples tongs are required, along with the scoopula. ...read more.

The formula for Ideal gas law is PV=NRT. For our values P is the pressure at STP and it is 101.325. R is the universal gas law constant which is 8.3145 m3�Pa/(mol�K). T is the temperature of the oven or the temperature at which respiration was happening. N is amount of substance, in mol and which is calculated by dividing the mass of carbon dioxide by the molar mass of carbon dioxide. After calculating the number of moles substitute the values of P, N, R and T and solve for V. By this experimenter would be able to find the volumes at different temperatures. The amount of carbon dioxide will indirectly tell experimenter the amount of ATP. Sample number Weight of the water tube Weight of CO2 (weight of water tube with CO2 - weight of water tube) Number of moles Mass of CO2 / molar mass of CO2 Amount of CO2 produced V=NRT/P 1 2 3 4 5 Sources "BBC - Education Scotland - Standard Grade Bitesize Revision - Ask a Teacher - Biology - Biotechnology - Question From ." BBC - Homepage. 10 Nov. 2008 <http://www.bbc.co.uk/scotland/education/bitesize/standard/other/sos/biology/biotechnology/biotechnology_16.shtml>. Papers - The Effect of Temperature on the Respiration of Yeast." Search Essays -- Free Essays and Term Papers. 9 Nov. 2008 <http://www.123helpme.com/view.asp?id=122462>. Inquiry into BIOLOGY. Ontario: Keith Owen Richards, 2007. ?? ?? ?? ?? By Rashiv Lubana ...read more.