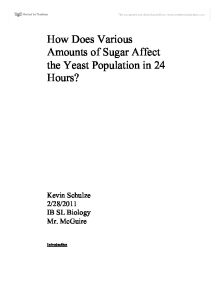 How Does Various Amounts of Sugar Affect the Yeast Population in 24 Hours? Kevin Schulze 2/28/2011 IB SL Biology Mr. McGuire Introduction Yeast is a unicellular organism and some of them are used for the making of. Fermentative yeast use sugars and convert them into carbon dioxide and alcohol to produce and create energy. With this energy they reproduce themselves asexually, and so the yeast population consists of both life and death, just like our population. Objective The objective of this experiment is to see the relationship between population and food, in this case, sugar. Research Question I will investigate how each amount of sugar relatively changes the yeast population in 24 hours. Hypothesis My hypothesis is that the yeast population will increase as the amount of sugar increases because reproduction will require energy and sugar is energy for the yeast. However, there will be a point where it hits the limit, as you can see on a S-Curve graph, and so there will be a point where it doesn't increase as much. Variables Independent Variables The independent variable in this experiment was the amount of sugar, used as the food energy of the yeast population. ...read more.

Yeast Population (5g) Glucose Sugar (0g, 1g, 2g, 3g, 4g, 5g) 100mL Distilled Water (6) Room Temperature Room (1) Weight Scale (1) Microscope (1) Dropper (1) Slide and Cap (6) Procedure 1. Obtain any necessary apparatus and materials for the experiment. 2. Get a set of yeast population with 5g of yeast provided from your teacher/advisor. 3. Get 6 500mL Beakers, and put 100mL of distilled water in each. 4. Take the weight scale to scale out 0g, 1g, 2g, 3g, 4g, 5g of glucose sugar. 5. Put each weighed sugar in separately so that it won't get mixed up. 6. Put each sugar set in each of the beakers. 7. Drop 10 drops of the yeast population into the beakers, and be sure to mix them well. 8. Take out a part of each solution, and place it on the slide. 9. Look at the slide with the microscope, and observe the yeast population. 10. The beaker with 0g of sugar will play a role as a constant, and so you do not have to record the data of before 24 hours. 11. After 24 hours, do the same thing as step #9, and now this time record the count of each yeast population in the beakers. ...read more.

However, it was fairly close. We could've improved this factor by changing the class schedule. However, this is close to impossible, so I believe that it was a acceptable weakness in the lab. Sugar: The amount of sugar that we put in was supposed to be accurate and consistent, but due to some errors including spilling and measurement could have cause the data to change a slight bit, but still will affect the data at the end as a result. As an improvement, we could have changed the method to contain and measure our glucose, so that we prevented it from spilling and other errors possible in the method. This may have led to a closer and more accurate data result and graph. Yeast: The amount of yeast solution affected our lab greatly, and this was one of our weaknesses since we could not assure that we will get a very fair consistency from the amount of yeast population, since it may not have been stirred correctly, not may have been that the dropper we used did leave some remainders of yeast, changing the concentration a little bit but still, affected the data. We could've improved this by using a better dropper if possible, or think of a better method in which we could have both accuracy and consistency. We could've also stirred the concentration more thoroughly, making the solution equally stirred. ...read more.