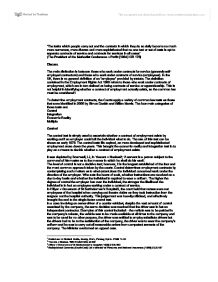 The tasks which people carry out and the contexts in which they do so daily become so much more numerous, more diverse and more sophisticated that no one test or set of tests is apt to separate contracts of service and contracts for services

'The tasks which people carry out and the contexts in which they do so daily become so much more numerous, more diverse and more sophisticated that no one test or set of tests is apt to separate contracts of service and contracts for services in all cases.' (The President of the Methodist Conference v Parfitt [1984] ICR 176) Discuss. The main distinction is between those who work under contracts for service (generally self-employed contractors) and those who work under contracts of service (employees). In the UK, there is no general definition of an "employee" provided by statute. The definition contained in the Employment Rights Act 1996 refers to those who work under contracts of employment, which are in turn defined as being contracts of service or apprenticeship. This is not helpful in identifying whether a contract of employment actually exists, so the common law must be considered1 To determine employment contracts, the Courts apply a variety of common law tests as those that were identified in 2000 by Simon Deakin and Gillian Morris. The four main categories of those tests are: Control Integration Economic Reality Multiple Control The control test is simply used to ascertain whether a contract of employment exists by working out if an employer could tell the individual what to do. The use of this test can be shown as early 1876. ...read more.

What is clear is that there is no singular decisive test that can be applied in order to determine the exact identity of the contract, however, in some cases there are so many factors on each side of the equation making it very difficult to reach a fair judgement. The multiple test was effectively established in 1968 in the case of Ready-mixed Concrete (South East) V Minister of Pensions and National Insurance6 when an owner-driver of a vehicle used exclusively for the delivery of a company's ready mixed concrete was engaged under a contract of service or a contract for services. The Minister decided that Mr Latimer was employed under a contract of service but, on appeal to the High Court, MacKenna J held that he was running a business of his own. In summing up MacKenna J said that Mr Latimer was a "small business man" and not a servant. "A contract of service exists if three conditions are fulfilled: The servant agrees that, in consideration of a wage or other remuneration, he will provide his own work and skill in the performance of some task for his master. He agrees, expressly or impliedly, that in the performance of that service he will be subject to the others control in a sufficient degree to make that other master. The other provisions of the contract are consistent with its being a contract of service"7 In Carmichael and another v National Power plc8, the ...read more.

These however are no part of the contract of service, either on reception into full connection or on appointment to a circuit, which Mr. Parfitt seeks to set up." To conclude, it is, therefore, possible to say that a high degree of uncertainty attaches to the legal criteria by which workers are classified. This means that the effectiveness of the law, in practice, may be called into question. However, it is important for both parties to know what the legal relationship is. On the part employer, he will then know the extent of his liability and on the part of the worker; he will know that rights he has, both in respect of his employer and in the wider context of welfare benefits and employment protection rights. It has also been made clear by above arguments that the existing classifications have become too rigid to deal effectively with the growth of non-standard forms of employment, that is to say, those forms of work which depart from the model of the 'permanent' or indeterminate employment relationship constructed around a full-time, continuous working week. The result is said to be the exclusion of certain groups of workers, whose status is unclear, from the protection of employment legislation. However, my opinion is in support to maintain the status quo and consider the scope of new rights of the self-employed on a case-by-case basis because radical change of their status may require changing some key Acts of Parliament in order to redefine workers and it will impact adversely to the small-businesses and overall economy. ...read more.