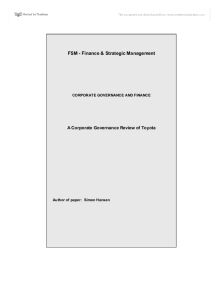 A Corporate Governance Review of Toyota

FSM - Finance & Strategic Management CORPORATE GOVERNANCE AND FINANCE A Corporate Governance Review of Toyota Author of paper: Simon Hansen Toyota Motor Corporation Toyota Motor Corporation, which is a part of the Toyota Group, is the largest world-wide automobile maker1. Since its first model, Toyota AA created in the late 30's, the corporation has grown to include the brands of Toyota, Scion, Lexus, Daihatsu and Hino Motors. The corporation employs more than 71,000. Besides cars Toyota Motor Corporation also offers financial services, robotics and biotechnology through several subsidiaries. The performance of Toyota Motor Corporation Toyota is definitely feeling the global financial crisis, combined with the recall of several millions cars, sales in 2010 has been falling. The latest financial result shows that sales is down with nearly 28 % since 2008 from 26.3 million yen to 18.9 million yen. 2008 was a good year for Toyota, despite the beginning of the financial crisis. Furthermore the gross profit margin is lower in 2010 compared to 2008, 22 % to 16 % in 2010. The lower revenue has naturally affected net income for the Toyota corporation, which has fallen 88 % in the same period from 1.7 million to 0.2 million yen2. The 2009 showed for the first time in 59 years red numbers on the bottom of the financial sheets. ...read more.

This is important to owners, as they want to know exactly how the company is performing. In the worst case, a bad performing management could try to hide poor performance in the financial statement. Toyota has established a board of corporate auditors, to ensure audit plans, methods and results are optimal. The board consists of 7 persons, of these 4 are external auditors with no direct relation to the Toyota group or any of its subsidiaries. The establishment of a internal board of auditors is without a doubt a good decision in accordance to corporate governance. The board is supposed to be supported by a department, but this department has not been established so far. To have full usage of the board of auditors, this department should be established on order to support them with the necessary informations. Internal guidelines for corporate governance With the release of the latest corporate governance report it shows that Toyota has established a set of guidelines. These are created to ensure that employees (directors, senior-managers and such) execute their responsibilities in compliance with relevant laws and regulations. Furthermore to ensure that they exercise their duties efficiently, by following policies, procedures and plans11. Identity of owners The owner of Toyota Motor Corporation, The Toyota group, is the single largest company in Japan and is the biggest of the vertically-integrated Keiretsu groups12. ...read more.