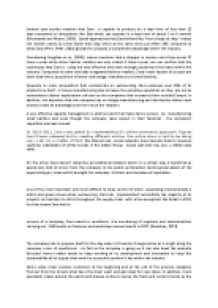 Analyse Reasons for Zara's Success in the Fashion Retailing Business

﻿Several case studies mention that Zara is capable to produce on a lead time of less than 15 days compared to competitors like Gap which can operate in a lead time of about 3 to 9 months (Ghemawat and Nueno, 2006). Speed approaches that Zara follows like ?from sheep to shop? makes the retailer nearly 12 times faster than Gap which at the same time just offers 10% compared to what Zara offers. (Heft, 2002) giving the company a competitive advantage within the industry. Considering Coughlan et al., (2006) where mentions that a shopper in London visits Zara stores 17 times a year while other fashion retailers are only visited 4 times a year, we can confirm that the techniques that Zara is using are very effective and have strongly positioned the brand within the industry. Compared to other vertically integrated fashion retailers, Zara?s main factors of success are short lead-times, acquisition of latest technology, manufacture of small batches, Opposite to most competitors that concentrate on outsourcing, Zara produces over 50% of its products by itself. In house manufacturing also increase the company reputation as they are not as vulnerable to labour exploitation criticism as the companies that outsource from outside Europe. In addition, the expertise that the company has on design manufacturing and distribution allows each brand to have an advantage over the rest of the retailers. ...read more.

(Tokatli, 2008) Afterwards, Zara manufactures samples that are tested in certain key stores and only the successful items are appointed for mass-production hence the companies percentage of failure is just 1% compared to an average 10% within industry (Ghemawat and Nueno, 2006). Zara aproximately receives one half of the fabric undyed so the company can react quickly to new trends plus Zara has it own dyeing company which allows them to react last-minute changes even faster. Robots cut and dye the cloths in 23 greatly automated factories outside the distribution centre. Zara?s fast reaction is a result of its highly vertical integration, Zara is able to manufacture 40 % of its own cloths and use its own subsidiaries as a supplier of most of its dyes. Considering Gap which is one of Zara?s competitors, they have a very different approach as each of their stores purchase the products independently so clients have a different choice between stores but Zara believes in the opposite. The real-time system that Zara uses to transfer information from the store to the commercial group is decisive for the first part of the companies supply chain as it eases the cooperation between customers, store managers and designers which allows Zara to be up to speed to face latest trends. Zara?s market based approach when pricing make the company differentiate from their competitors again as fashion retailers normally decide the prices depending on the cost to produce the item plus a target margin. ...read more.

The stores are large, the racks are dispersed within the store leaving plenty of space for customers; all of the above plus music, temperature, store and window layout, etc are checked on regular basis by mistery shoppers so the company can quickly adjust to the market demands (Monllor, 2011). Kumar and Steenkamp (2007, pg39) explained that Zara does not focus on conventional advertising techniques as tv campaigns or magazines, instead their main marketing method are relied on their prime store locations, the store itself and store windows which are large, expressive and too keep it exciting and refreshed for customers eyes its changed every two weeks. Rather than spending millions in advertising Zara believes in word of mouth so if the customer enjoys their experience at one of their store then they will tell their friends about it. H&M which is one Zara?s biggest competitors spends about 3.5% of their profit in advertising when Zara only spends in average 0.3%, even though Zara does not have a formalized marketing department , in 2006 the company was included in the 50 companies with the best marketing strategies in the American Magazine Advertising Age. (Iglesias, 2008 pg 18) Sources: Christopher, 1998: 155?57; Burt, Dawson and Larke,2003;Retail Week21 Nov 2003: 16?17. Or Fernie, J and Sparks,L. 2004 Zara offers to customers a range of quality garments for women, men and kids, shoes, accessories, toiletries, and cosmetics at reasonable prices. Figure 1. Zara?s Product Line Source: Inditex (2012) ...read more.