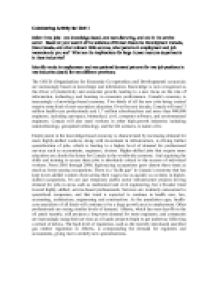 Culminating Activity for Unit 1 Select three jobs: one knowledge-based, one manufacturing, and one in the service sector. Based on your search of the websites of Human Resource Development Canada, Stats Canada, and other relevant Web sources, what patterns in employment and job vacancies do you see? What are the implications for large human resource departments in these industries? Identify trends in employment and occupational demand patterns for two job positions in two industries (each) for two different provinces. The OECD (Organization for Economic Co-operation and Development) economies are increasingly based on knowledge and information. Knowledge is now recognized as the driver of productivity and economic growth, leading to a new focus on the role of information, technology and learning in economic performance. Canada's economy is increasingly a knowledge-based economy. Two-thirds of all the new jobs being created require some kind of post-secondary education. Over the next decade, Canada will need 3 million health-care professionals and 1.7 million schoolteachers and more than 900,000 engineers, including aerospace, biomedical, civil, computer software, and environmental engineers. Canada will also need workers in other high-growth industries including nanotechnology, geospatial technology, and the life sciences, to name a few. Employment in the knowledge-based economy is characterized by increasing demand for more highly-skilled workers, along with investment in infrastructure, is driving further specialization of jobs, which is leading to a higher level of demand for professional services such as accountants, engineers, doctors. Higher-skilled jobs that require more education are clearly the future for Canada in the worldwide economy. And acquiring the skills and training to access these jobs is absolutely critical to the success of individual workers. From 2001 through 2006, high-paying occupations grew almost three times as much as lower-paying occupations. There is a "skills gap" in Canada's economy that has kept lower-skilled workers from seeing their wages rise as quickly as workers in higher-skilled occupations. It's not just temporary public sector infrastructure projects driving demand for jobs in areas such as mechanical and civil engineering, but a broader trend toward highly skilled, service-based professionals. ...read more.

market. From a policy perspective, there is little Canada can do about this. The export potential for vehicles produced in Canada is effectively driven by the type of vehicles foreign-owned manufacturers decide to produce in their Canadian assembly plants. The larger growth area for the Canadian automotive industry in recent decades has been in parts and components which, by 2002, had reached 66% of total automotive employment, up from 55% in 1991. Exports of automotive parts, while also very concentrated in the United States, are slightly more diversified than is the case for vehicles. The two line graphs above show the slow growth of automotive industry in Canada and USA compared to other countries which shows that in the future years there will be lots of competition and Canada will not be able to compete with them and grow with the same rate of Japan and China. Furthermore, the red line is for USA and Canada combined, USA's economy contributes to a large amount in the world therefore if we were to consider Canada only the line might even have decrease instead of increasing in the first line graph. There are many factors that are likely to affect the future direction of the automotive industry in Canada, including: the types of fuels that cars will be using; whether current trends towards keeping manufacturing close to the location of the final customer remain constant; future sales volumes in North America; the location of research and development; and government policy. However, among the limited areas where government intervention may have an effect on the automotive sector, intervention in the area of trade policy is likely to have a more limited net effect on welfare than alternatives such as investment, research and development, and infrastructure support. Canada had, and continues to have, marginally lower operating costs than the U.S. and a strong industrial culture that attracts investment. ...read more.

The business justification for a workforce reduction, should a workforce reduction become necessary, should be documented. This means that an employer can provide evidence that alternatives to layoffs were considered or tried. If litigation results from a workforce reduction, this documentation is beneficial to show a jury that business reasons were the only consideration in the decisions about workforce reduction. Contract and temporary employees expect to be let go depending on the changing needs of the business. While this causes some turmoil in the lives of temporary employees, the employer does not have the same commitment to these employees as to regular employees. Temps provide a cushion of safety for the ongoing employment of regular employeees. To avoid employee layoffs, let all contract and temporary staff go. In selecting people for redundancy, use objective criteria that can be applied in an unbiased way. This can include, for example, attendance records, disciplinary records, skills, experience or competence, work standards or aptitude to work. Ensure that the selection criteria are based on accurate records and are not discriminatory, directly or indirectly. If there is no trade union, set up a special employee forum or consultative body long enough before the redundancies occur to provide information and to consult. Ensure that you are not losing vital skills in encouraging voluntary redundancy. Reallocate jobs and responsibilities among the remaining workforce. Reorganize work spaces to eliminate gaps where people used to work: plan for a fresh start. Provide training for new jobs and new positions. Communicate and consult at all stages and pay particular attention to ensuring that line managers are fully involved in the change programme. Give positive messages focusing on the opportunities as well as the challenges ahead. In conclusion, I think offering voluntary redundancy terms is a better way to start things off rather than just firing employees because redundancies can have a serious negative impact on morale and performance on the company if you force someone to leave but offering voluntary term is better. ...read more.