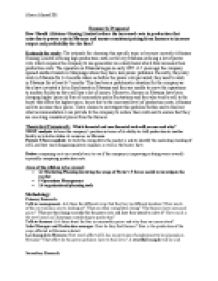 ﻿Aleem Ahmed IB1 Research Proposal How Should Afrisians Ginning Limited reduce the increased costs in production that arise due to power cuts in Mwanza and ensure consistent pricing from farmers to increase output and profitability for the firm? Rationale for study: The rationale for choosing this specific topic is because currently Afrisians Ginning Limited is facing high production costs, as the city Mwanza is facing a lot of power cuts, which requires the company to use generators on a daily basis which thus increases their production costs. The operation in Mwanza began in early 1997. 6-7 years ago the company opened another branch in Shinyanga where they have less power problems. Recently, they only work in Mwanza for 3-4 months where as before the power cuts prevailed, they used to work in Mwanza for at least 6-7 months. ...read more.

SWOT analysis: to learn the company?s position in terms of its ability to shift production to another facility or to better utilize its resources in Mwanza. Porters 5 Force analysis: to study the competitive the market is and to identify the marketing standing of AGL and how much bargaining power suppliers as well as the buyers have. Ratios: comparing costs on a yearly basis to see if the company is improving or doing worse overall.- especially comparing production costs. Areas of the syllabus to be covered: 1. 4.2 Marketing Planning involving the usage of Porter?s 5 forces model to investigate the market 2. 5 Operations Management 3. 1.6 organizational planning tools Methodology: Primary Research: Talk to management- Ask them the different crops that they buy in different locations? ...read more.

3. Check if AGL has been on the paper recently and why? 4. Ask about the production schedule and use it to make analysis. Anticipated Difficulties 1. Farmers are far away in the villages, would be hard to get their point of view.** major difficulty 2. Management may not want to provide their farmers due to the possibility of other companies trying to offer a better deal to them. 3. Most of the employees will be talking in the native language- hence I would provide questionnaires in Swahili and also provide a translation- even higher management. 4. Sometimes it is difficult to ask the company on their weaknesses as they might be reluctant to open up to the weaknesses faced by them. ? ask questions indirectly to get the information from management. 5. Management may be reluctant to show profit margins per product. ...read more.