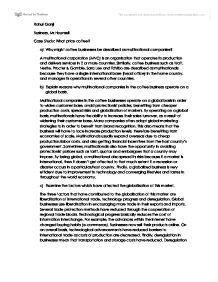 Examine the factors which have affected the globalization of this market. The three factors that have contributed to the globalization of this market are liberalization of international trade, technology progress and deregulation. Global businesses use liberalization in encouraging more trade in their exports and imports. Several trade protection methods have reduced through the cooperation of regional trade blocks. Technological progress basically reduces the cost of information interchange. For example, the advances within the internet have changed buying habits (e-commerce). Businesses now sell their products online. On an overall basis, technological advancements have reduced barriers to international trade as costs of production are decreased. Finally, deregulation in businesses mean that transportation and storage costs have reduced. Deregulation has also encouraged the growth of multinationals corporations to enjoy more of a global presence. ...read more.

e) Evaluated the impact of the global coffee business on coffee farmers in developing countries. There are several positive as well as negative impacts of global coffee businesses on coffee farmers in developing countries. In developing countries, high unemployment rates are becoming a growing concern. Multinationals help in eliminating unemployment by creating a heck lot of jobs, in thousands. This not only reduces the burden of the host country's government, but also increases the national income of these countries, thereby improving standards of living. However, global businesses have been criticized for paying low wages in developing countries. They have also been criticized for their treatment of those in these countries. Anti-globalization and environmentalists are concerned about the social responsibility of these businesses. They often attempt in expanding and exploiting the scarce resources. Furthermore, due to the market power of such businesses, there are some concerns about the ability of the government in controlling their actions. ?? ?? ?? ?? Rahul Ganji Business, Mr.Hounsell ...read more.