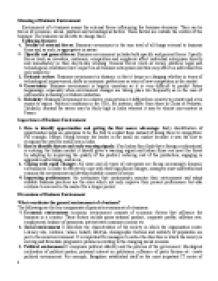 ﻿Meaning of Business Environment Environment of a business means the external forces influencing the business decisions. They can be forces of economic, social, political and technological factors. These factors are outside the control of the business. The business can do little to change them. Following features: 1. Totality of external forces: Business environment is the sum total of all things external to business firms and, as such, is aggregative in nature. 2. (Specific and general forces: Business environment includes both specific and general forces. Specific forces (such as investors, customers, competitors and suppliers) affect individual enterprises directly and immediately in their day-to-day working. General forces (such as social, political, legal and technological conditions) have impact on all business enterprises and thus may affect an individual firm only indirectly. 3. Dynamic nature: Business environment is dynamic in that it keeps on changing whether in terms of technological improvement, shifts in consumer preferences or entry of new competition in the market. 4. Uncertainty: Business environment is largely uncertain as it is very difficult to predict future happenings, especially when environment changes are taking place too frequently as in the case of information technology or fashion industries. 5. Relativity: Business environment is a relative concept since it differs from country to country and even region to region. Political conditions in the USA, for instance, differ from those in China or Pakistan. Similarly, demand for sarees may be fairly high in India whereas it may be almost non-existent in France. ...read more.

Legal environment This consists of legislation that is passed by the parliament and state legislatures.Examples of such legislation specifically aimed at business operations include the Trade mark Act 1969, Essential Commodities Act 1955, Standards of Weights and Measures Act 1969 and Consumer Protection Act 196. 5. Technological environment It includes the level of technology available in a country. It also indicates the pace of research and development and progress made in introducing modern technology in production. Technology provides capital intensive but cost effective alternative to traditional labor intensive methods. In a competitive business environment technology is the key to development. Economic Environment in India In order to solve economic problems of our country, the government took several steps including control by the State of certain industries, central planning and reduced importance of the private sector. The main objectives of India?s development plans were: 1. Initiate rapid economic growth to raise the standard of living, reduce unemployment and poverty; 2. Become self-reliant and set up a strong industrial base with emphasis on heavy and basic industries; 3. Reduce inequalities of income and wealth; 4. Adopt a socialist pattern of development ? based on equality and prevent exploitation of man by man. As a part of economic reforms, the Government of India announced a new industrial policy in July 1991. The broad features of this policy were as follows: 1. The Government reduced the number of industries under compulsory licensing to six. ...read more.

5. Globalisation involves an increased level of interaction and interdependence among the various nations of the global economy. 6. Physical geographical gap or political boundaries no longer remain barriers for a business enterprise to serve a customer in a distant geographical market. Impact of Government Policy Changes on Business and Industry 1. Increasing competition: As a result of changes in the rules of industrial licensing and entry of foreign firms, competition for Indian firms has increased especially in service industries like telecommunications, airlines, banking, insurance, etc. which were earlier in the public sector. 2. More demanding customers: Customers today have become more demanding because they are well-informed. Increased competition in the market gives the customers wider choice in purchasing better quality of goods and services. 3. Rapidly changing technological environment: Increased competition forces the firms to develop new ways to survive and grow in the market. New technologies make it possible to improve machines, process, products and services. The rapidly changing technological environment creates tough challenges before smaller firms. 4. Necessity for change: In a regulated environment of pre-1991 era, the firms could have relatively stable policies and practices. After 1991, the market forces have become turbulent as a result of which the enterprises have to continuously modify their operations. 5. Threat from MNC Massive entry of multi nationals in Indian marker constitutes new challenge. The Indian subsidiaries of multi-nationals gained strategic advantage. Many of these companies could get limited support in technology from their foreign partners due to restrictions in ownerships. Once these restrictions have been limited to reasonable levels, there is increased technology transfer from the foreign partners ...read more.