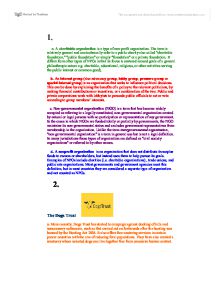 1. a. A charitable organization is a type of non-profit organization. The term is relatively general and can technically refer to a public charity also called "charitable foundation," "public foundation" or simply "foundation" or a private foundation. It differs from other types of NPOs in that its focus is centered around goals of a general philanthropic nature e.g. charitable, educational, religious, or other activities serving the public interest or common good). b. An interest group (also advocacy group, lobby group, pressure group or special interest group) is an organization that seeks to influence political decisions. This can be done by explaining the benefits of a policy to the relevant politicians, by making financial contributions or incentives, or a combination of the two. Public and private corporations work with lobbyists to persuade public officials to act or vote according to group members' interests. c. Non-governmental organization (NGO) is a term that has become widely accepted as referring to a legally constituted, non-governmental organization created by natural or legal persons with no participation or representation of any government. ...read more.

It also campaigned against cruel treatment of dogs by railway companies, who often refused to provide water for dogs. Dogs Trust tries to rehome most dogs which it cares for, with 17 rehoming centres across the UK c. Dogs Trust was founded in 1891 at a meeting during the first Crufts show chaired by Lady Gertrude Stock. Known as the National Canine Defense League (NCDL) a. Greenpeace is a non-governmental organization for the protection and conservation of the environment. b. * Tackling human-induced climate change (global warming) * Preserving the oceans (including stopping whaling and bottom trawling) * Saving ancient forests (see deforestation, Intact forest landscapes) * Peace and nuclear disarmament * Promoting sustainable agriculture (and opposing genetic engineering) * Eliminating toxic chemicals (including from E-waste), many of which are carcinogens c. Greenpeace, originally known as the Greenpeace Foundation, was founded in Vancouver, British Columbia, in 1971. Early meetings were held in the Shaughnessy home of Robert and Bobbi Hunter. ...read more.