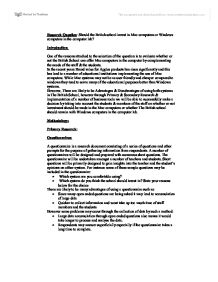 Research Question: Should the British school invest in Mac computers or Windows computers in the computer lab? Introduction: One of the reasons attached to the selection of the question is to evaluate whether or not the British School can offer Mac computers in the computer by complementing the needs of the staff & the students. In the recent years Brand value for Apples products has risen significantly and this has lead to a number of educational institutions implementing the use of Mac computers. While Mac systems may not be as user friendly and cheaper compared to windows they tend to serve many of the educational purposes better than Windows systems. However, There are likely to be Advantages & Disadvantages of using both systems in The British School, however through Primary & Secondary Research & implementation of a number of business tools we will be able to successfully make a decision by taking into account the students & members of the staff on whether or not investment should be made in the Mac computers or whether The British school should remain with Windows computers in the computer lab. Methodology: Primary Research: Questionnaires: A questionnaire is a research document consisting of a series of questions and other prompts for the purpose of gathering information from respondents. A number of questionnaires will be designed and prepared with numerous short questions. The questionnaire will be undertaken amongst a number of teachers and students. Short questions will be primarily designed to gain insights into the teacher and the student's opinions on either system. For instance some of these sample questions may be included in the questionnaire: * Which system are you comfortable using? * Which system do you think the school should invest in? ...read more.

It's all part of iWork, a suite of productivity applications designed for the Mac. Secondary Research: A lot of our secondary research was Internet-Based. We looked deeply into Apple's website and tried to extract to certain information/documents which highlighted their rationale into choosing Apple for educational purposes. From Apples Website: Even People with Disabilities can exploit Mac to its Best uses. Some of the features on the Mac which help people with certain disabilities: Vision People with vision disabilities will benefit from VoiceOver - the world's first gesture-based screen reader, built into every Mac. Hearing The Mac makes it easier for the deaf and hard-of-hearing by including support for playing back open- and closed-captioned content. Physical and Motor Skills The Mac has built-in technologies to help people with difficulties using the keyboard, mouse, and trackpad. Literacy and Learning People with cognitive and learning disabilities can benefit from a simplified Finder, integrated information reference tools, spelling and grammar checking, and more. It stated 10 reasons for choosing Mac as an operating system in educational institutions. Some of them were: * A strong, enduring commitment to education. * Technology that advances learning for a new generation * Reliable Products that are easy to support * A consistent focus on innovation * The most compatible and interoperable technology platform * A platform that provides high value. To summarise the research we have implemented, we give a brief note on the Advantages and Disadvantages of both the systems: Advantages of a Mac computer: * No virus , malware or spyware can be encountered * Good for Designing , Animation and Media * Good for highly skilled work such as editing * Latest software and features * Inbuilt key features such as the networking , wireless connection * Inbuilt voice recorder and camera Disadvantages to ...read more.

Conclusion: While Mac's may not be cost friendly they tend to provide a number of features which are likely to enhance the school's image and the students work. Windows on the other hand is a much more comfortable system to use and has is cost-effective. Choosing 1 particular system is a very tough choice. Both have Equal amounts of advantages and disadvantages to the school and the student body. However we picked an alternate solution towards such a problem in the recommendation below Recommendation Looking at all the data available and brainstorming within the group, we have concluded that the school does not need to replace all its computers as they have recently been upgraded with better hp monitors and CPUs. However, the school could invest in 4-5 iMac's which could be set up on one side of either of the 2 labs or could have 2 in each lab. By this, the school won't have to buy all new computers or get rid of all the existing ones. The ones being replaced could be used elsewhere in the school, sold or recycled. By buying Macs, the school will make it easy for Mac users who might even be able to work up to their whole potential as they would be more comfortable on their preferred system. By keeping the existing computers, current window users will not have to fear on working on a completely different system which they are not knowledgeable about. By doing the above, the British School will have the two most popular and used software's running simultaneously together, making life much easier for its students plus also giving the school one of the best computer labs compared to any school in Delhi. Business Mock IA Project By Arjun Sharma, Anosh Habib and Kanav Ahuja Research Question: Should the British school invest in Mac computers or Windows computers in the computer lab? ...read more.