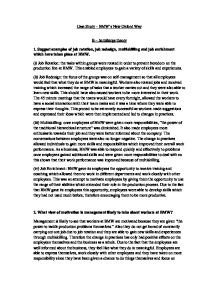 Case Study - BMW's New Oxford Way B - hertzbergs theory 1. Suggest examples of job rotation, job redesign, multiskilling and job enrichment which have taken place at BMW. (i) Job Rotation: the tasks within groups were rotated in order to prevent boredom on the production line at BMW. This enabled employees to gain a variety of skills and experiences. (ii) Job Redesign: the focus of the groups was on self-management so that all employees would feel that what they do at BMW is meaningful. Workers also rotated jobs and received training which increased the range of tasks that a worker carries out and they were also able to learn new skills. This should have also caused workers to be more interested in their work. The 45 minute meetings that the teams would have every fortnight, allowed the workers to have a social interaction with their team mates and it was a time where they were able to express their thoughts. This proved to be extremely successful as workers made suggestions and expressed their ideas which were then implemented and led to changes in practices. (iii) Multiskilling: once employees of BMW were given more responsibilities, "the power of the traditional hierarchical structure" was diminished. ...read more.

Management at BMW can clearly see that workers have been motivated by the implementation of team work due to the savings of �6.3 million over a 12 month period but also due to the enthusiastic nature of the employees and the fact that the gulf between managers and employees has been reduced. 3. Explain the benefits of team working at BMW for employees and the business itself. (i) The benefits of team working for employees at BMW are that they can specialize and draw on the skills and knowledge of other group members. Even the best qualified individual cannot possess all of the skills to do everything so employees were trained and also gained new skills by working together with people from different departments. The responsibility is shared amongst the team so therefore employees are more prepared to take risks and at BMW they felt as though they were a part of something and what they did was meaningful. Through brainstorming, ideas were created and this not only helped employees because they had the chance to express themselves but it also helped the business as a whole. Not only were better ideas generated through team work but teams came up with a whole diversity of ideas because they were working together with employees from different departments who possess diverse skills and have had different experiences. ...read more.

- Employees are more likely to agree with changes if they participate in decision making. - Employees feel trusted. - Long term effect on the business would be that there should be an increase in productivity because employees are more motivated. Disadvantages of Employee Empowerment: - Employees can abuse the increased power given to them. - Some employees may focus on their own success rather than the success of the company. - There is an increased cost to the organization for training and education. - Conflicts or power struggles may occur between employees due to group work. In order for the Wings system to be successful, there needs to be a balance between employee empowerment and traditional management. The manager of the department needs to be sensitive to the employees' and the company's needs and chose a management style that will work best to achieve the objectives of the company. Employee empowerment is necessary in order for the Wings System to be successful because a major part of the Wings System is that employees are given more responsibility and it is supposed to allow employees to learn new skills and feel motivated and self-confident with what they do. These factors are included in employee empowerment and therefore employee empowerment is necessary in order to keep employees motivated and allow them to work in a comfortable environment where they feel appreciated. ...read more.