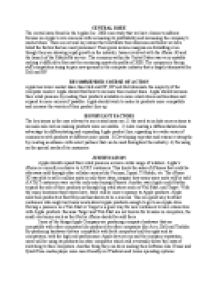 ﻿CENTRAL ISSUE The central issue found in the Apples Inc. 2008 case study that we have chosen to address focuses on Apple?s own concerns with increasing its profitability and increasing the company?s market share. There are several key issues that contribute their dilemma and below we have listed the factors that are most prominent. Their gross income margins are dwindling even though they are showing rapid growth in the industry. Issues involved with the iPhone 3G and the launch of the MobileMe service. The economy within the United States was very unstable making it difficult to forecast the remaining quarterly profits of 2008. The company is facing stiff competition trying to gain new ground in the computer industry that is largely dominated by Dell and HP. RECOMMENDED COURSE OF ACTION Apple has lower market share than Dell and HP, HP and Dell dominate the majority of the computer market. Apple should find how to increase their market share. ...read more.

Having a presence in a Wal-Mart or Target is a great way for new customers to have interaction with Apple products. Because Target and Wal-Mart are not known for its sales in computers, the small electronics such as the iPod or iPhone should be sold there. Some of the things Apple Company are producing computer hardware that are compatible with other computers like produced by other companies like Acer, Dell and Toshiba. By producing hardware that are compatible with both computers built by apple and its competitors, with the high-end performance Apple devices run and the company reputation, users will be using its products on other computers which will eventually lower the costs of switching to their computers. Another thing they can do is making their software like iTunes and QuickTime media player more user-friendly on Windows and Linux operating systems especially since its products don?t support the windows Aero look in Windows Vista; this move will increase the usage of them and by doing that increase the profit generated through selling music, applications or even advertising. ...read more.

They have made leaps in technology and products and have added variety in options, and features. Apple phones and newer product iPad have become available with more internet and cellular carriers than just AT&T. The iPhone is available for several cellular carriers including Sprint and Verizon and smaller growing noncontract providers. iPad 3G internet is available on Verizon and AT&T. Apple products are no longer just available in a few locations such as Apple Stores, Apple products can be purchased at major retailers such as Wal-Mart, Target, and Best Buy. These expansions into other retailers have helped to expand availability of their products and services. The change from being exclusive with AT&T has made the iPhone a more available option with other networks. Their devices being available in several locations and with more varieties have made the product more noticeable amongst competing products. Apple has made the iPod with more variety and more affordable lower memory devices and Apple has made used and refurbished Apple products available on their website to make an older product more affordable to many more custom bases. ...read more.