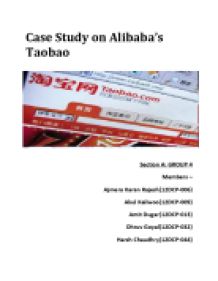 In 2008 Taobao integrated Alimama.com, an online ad company with a network of more than 400,000 specialized websites where Taobao sellers could affordably post ads to reach their target audiences. These complementary ventures formed a network, with Taobao at the centre surrounded by interlinked companies. All cross-sold and cross-marketed each other?s services and offered packaged deals to Taobao sellers. As this ?ecosystem? developed it attracted other businesses to use Taobao, Alipay, Alisoft and Alimama?s platforms to provide further customized services to Taobao sellers. The extent and reach of the ecosystem became too hard for rivals to replicate. By 2010 Taobao served more than 80 per cent of China?s e-commerce market, with 170m registered users and revenues of more than Rmb20bn from online advertising and fee-paying services such as shop design and sales training. Meanwhile, Ebay moved its business focus to cross-border e-commerce, where Chinese consumers sell to overseas consumers. It holds a leading position in that segment. Key lessons First, Taobao provided services and solved problems for the smaller businesses that are the driving force behind China?s economic boom. For instance, Alipay enabled people to pay for goods and services easily. ...read more.

2. Merging smaller companies to get their customer database and expanding to each and every corner of China. Threats 1. Business units might compete with each other in terms of resources also. 2. Companies doing e-commerce can enter the Chinese market with the similar strategy as that of Taobao. 3. World Economic Recession has a direct impact on e-commerce business as that of Taobao?s. 4. Advancement in hacking might lead to huge losses in business. For example ? of hackers hack Alipay. GOING GLOBAL Now, Ma is pushing Alibaba in new directions. The company has launched local versions of its B2B service in Japan, South Korea, and India. In November, it slashed the $7,000 price for Gold Supplier membership by more than half to hold on to customers. It has 43,000 today. On Mar. 31, Alisoft announced it would give its Shopkeeper?a package including accounting, inventory management and customer resource management software?to small and midsize users for free. And Ma has plans to expand Alibaba's presence worldwide, spending $30 million on marketing to expand small offices in the U.S. and Britain. The company will add 5,000 employees, mostly in China, to raise its head count to 17,000. Not many companies are hiring these days, but Ma says Alibaba has to expand. "Our customers want to be global," he says. ...read more.