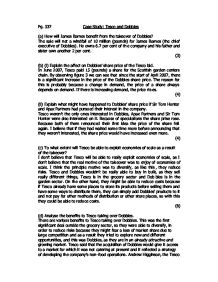 Case Study: Tesco and Dobbies. Analyse the benefits to Tesco taking over Dobbies.

Pg. 537 Case Study: Tesco and Dobbies (a) How will James Barnes benefit from the takeover of Dobbies? The sale will net a windfall of 10 million (pounds) for James Barnes (the chief executive of Dobbies). He owns 6.7 per cent of the company and his father and sister own another 2 per cent. (3) (b) (i) Explain the affect on Dobbies' share price of the Tesco bid. In June 2007, Tesco paid 15 (pounds) a share for the Scottish garden centers chain. By observing figure 3 we can see that since the start of April 2007, there is a significant increase in the price of the Dobbies share price. The reason for this is probably because a change in demand, the price of a share always depends on demand. ...read more.

I believe that if they had waited some time more before announcing that they weren't interested, the share price would have increased even more. (4) (c) To what extent will Tesco be able to exploit economies of scale as a result of the takeover? I don't believe that Tesco will be able to really exploit economies of scale, as I don't believe that the real motive of the takeover was to enjoy of economies of scale. I think the principle motive was to diversify, as like this, they reduce risks. Tesco and Dobbies wouldn't be really able to buy in bulk, as they sell really different things, Tesco is in the grocery sector and Dobbies is in the garden sector. ...read more.

due to large competition and as a result they tried to explore new and different opportunities, and this was Dobbies, as they are in an already attractive and growing market. Tesco said that the acquisition of Dobbies would give it access to a market for which it was not catering at present and it reflected a strategy of developing the company's non-food operations. Andrew Higginson, the Tesco finance director, said that the supermarket saw potential to expand the range of environmentally-friendly products in Dobbies, adding that it offered a 'big emerging market' in consumer spending. Overall I believe that Tesco did a good deal taking over Dobbies, asd it is the UK's third largest garden center chain, with 21 store based mainly in Scotland and the north of England. (8) Silvia Sans Y-12 ...read more.