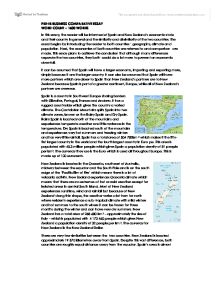 In this essay, the reader will be informed of Spain and New Zealand's economic state and their country in general and the similarity and dissimilarity of the two countries. The essay begins by introducing the reader to both countries' geography, climate and population. Next, the economies of both countries are referred to and comparison are made. This essay plans to achieve the conclusion that although many differences separate the two countries, they both could do a lot more to prevent an economic downfall. It can be assumed that Spain will have a larger economy, importing and exporting more, simply because it are the larger country. It can also be assumed that Spain will have more partners which are closer to Spain than New Zealand's partners are to New Zealand because Spain is part of a greater continent, Europe, while all of New Zealand's partners are overseas. Spain is a country in Southwest Europe sharing borders with Gibraltar, Portugal, France and Andorra. It has a rugged countryside which gives the country a varied climate. The Cantabrian Mountains splits Spain into two climate zones, known as the Rainy Spain and Dry Spain. Rainy Spain is located north of the mountains and experiences temperate weather and little variance in the temperature. Dry Spain is located south of the mountains and experiences very hot summers and freezing winters and has very little rainfall. ...read more.

Spain's purchasing power parity is $1.378 trillion. This means that Spain has the 12th highest purchasing power parity in the world. Spain imports 58.8 billion US dollars and exports 85.3 billion US dollars worth of services, which includes transport and tourism, which makes the invisible balance 22 129 million Euros. The visible balance is -123, 516 million US dollars. The balance of trade is -87 861 million Euros. This indicates that Spain imports more than they export. Spain spends 0.1378 trillion dollars more on imports than they receive for exports which is ten percent of their GDP. Since Spain has a positive invisible balance, the balance of trade is negative because the value of Spain's imported goods outweighs the value of Spain's exported goods. New Zealand has a GDP (PPP) of $111.7 billion, which gives it the 59th highest PPP worldwide. New Zealand has an invisible balance of $983 million and a visible balance of -$1.2 billion dollars. It has a balance of trade of $346.5 million. The services New Zealand trades are education, professional services, tourism, transportation, government services, foreign exchange, travel, banks, food, hotels, liquors, cafes, restaurants, and takeaway. New Zealand exports 7 608 million dollars worth of services and imports $8 561 million. However, these figures may be inaccurate as they were recorded in 1999. ...read more.

American Dollars 0.789841 Australian Dollars 0.350737 British Pounds 3.5037 Chinese Yuan 0.399473 Euros 24.9375 Indian Rupees 45.9554 Japanese Yen 18.6158 Russian Rubles 0.77198 Singapore Dollars 17.9144 Thai Bahts Rounded off, one Euro is worth 2.5 times one New Zealand dollar which is also the same ratio for Spain and New Zealand's population density. The CIA website was used for most of the data because it is a government source and contained up to date information. Most of the data collected are corroborated by another source so ensure its accuracy. If there was a difference in the data, the data from the most trustworthy site and is the most recently gathered was used. Spain is a much larger country in relation to New Zealand and thus has a larger population and spends more money in trade. In conclusion, Spain and New Zealand are two very different countries who have basically nothing in common in both geography and economy. They trade to different countries with different goods. Spain trades more closely with partners in the European Union and New Zealand trades closely with Australia, its closest neighbour. However, New Zealand is currently in a better economic state as they receive more money for their exports than their imports cost. This, however, is not the same for Spain. Both economies could be in a better position for the future to prevent losses due to external trade. ...read more.