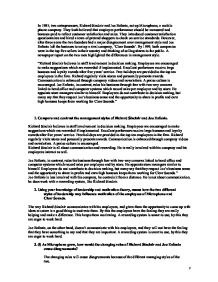 Compare and contrast the management styles of Richard Sinclair and Joe Enfente.

In 1985, two entrepreneurs, Richard Sinclair and Joe Enfente, set up Microphone, a mobile phone company. They both believed that employee performance should be measured and bonuses paid to reflect customer satisfaction and sales. They introduced customer satisfaction questionnaires and hired a team of pretend shoppers to check on service standards. However, after three years the two founders had a major disagreement over management style and Joe Enfente left the business to set up a rival company, 'Clear Sounds'. By 1999, both companies were in the top five sellers in their country and thinking of selling shares to the public. A newspaper report on the two men highlighted the differences in management style. ...read more.

Employees are encouraged to make suggestions which are rewarded if implemented. Excellent performers receive large bonuses and loyalty awards after five years' service. Free holidays are provided to the top ten employees in the firm. Richard regularly visits stores and personally presents awards. Communication is enhanced through company videos and newsletters. A praise culture is encouraged. Richard Sinclair is all about communication and rewarding. He is really involved with his company and his employees interact as well. Joe Enfente, in contrast, rules his business through fear with two-way cameras linked to head office and computer systems which record sales per employee and by store. He appoints store managers similar to himself. Employees do not contribute to decision making, but many say that they respect Joe's business sense and the opportunity to share in profits and earn high bonuses keeps them working for Clear Sounds." ...read more.