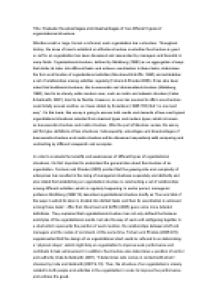 Evaluate the advantages and disadvantages of two different types of organizational structure.

﻿Title: Evaluate the advantages and disadvantages of two different types of organizational structure. Whether small or large, formal or informal, each organization has a structure. Throughout history, the issue of how to establish an effective structure or whether the structure is good or not for an organization has been discussed and researched by managers and theorists in many fields. Organizational structure, defined by Mintzberg (1980) as an aggregation of ways that divide its labor into different tasks and achieve coordination in these tasks, determines the form and function of organizational activities (Moorhead & Griffin, 1995) and establishes a set of relationships among activities regularly (Ficham & Rhodes 2005). It has also been noted that traditional structures, like bureaucratic and divisionalized structure (Mintzberg, 1980), tend to be steady, while modern ones, such as matrix and network structure (Kates & Galbraith, 2007), tend to be flexible. However, no one has seemed to affirm one structure could totally exceed another, as it was stated by Donaldson (1985:155) that ?no one best way?. On this basis, this essay is going to assess both merits and demerits of two most typical organizational structures selected from classical types and modern types, which is known as bureaucratic structure and matrix structure. ...read more.

and Mintzberg (1993), it still exists in a number of industrial companies in modern society (Fincham and Rhodes, 2005), because it has brought many benefits to business and employees. The most significant advantage is that tasks tend to be accomplished more efficiently and effectively in a bureaucratic structure. On the basis of highly developed division of labor and specialization of tasks, according to Mintzberg(1980), each member thus could know clearly what exactly they should do. Meanwhile, offering detailed and precise rules of the responsibility and duties of each position could also reduce the cost of transaction between staff and managers, mentioned by Jones (2001). This is because ways of rewarding, punishing or how they work are all regulated in the rules (ibid), which means that employees just need to follow the direction set by the authority and are unnecessary to further question about the work or identify their roles repeatedly. Furthermore, bureaucratic organizational structure could also provide a stable environment for staff. In a description of Mintzberg (1993), all functions are defined in a settled place of activity. Thus, roles in bureaucratic organization are less likely to move, which could ensure the stability of organization and might also help the staff improve a skill and be competitive in the area in which they have expertise on a long-term basis. ...read more.