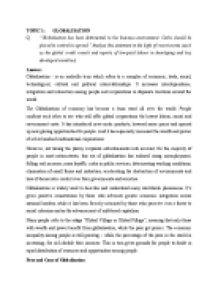 Globalisation needs to be controlled.Analyse this statement in the light of recent events (such as the global credit crunch and reports of low-paid labour in developing and less developed countries).

﻿TOPIC 1: GLOBALISATION Q: ?Globalisation has been detrimental to the business environment. Curbs should be placed to control its spread.? Analyse this statement in the light of recent events (such as the global credit crunch and reports of low-paid labour in developing and less developed countries). Answer: Globalisation - is an umbrella term which refers to a complex of economic, trade, social, technological, cultural and political interrelationships. It increases interdependence, integration and interaction among people and corporations in disparate locations around the world. The Globalisation of economy has become a buzz word all over the world. People confront each other to see who will offer global corporations the lowest labour, social and environment costs. It has introduced new exotic products, lowered some prices and opened up new glaring opportunities for people. And it has especially increased the wealth and power of a few hundred multinational corporations. However, not taking the phony corporate advertisements into account, for the majority of people in most nation-states, this era of globalisation has endured rising unemployment, falling real incomes, mass layoffs, curbs in public services, deteriorating working conditions, elimination of small farms and industries, accelerating the destruction of environments and loss of democratic control over their governments and societies. Globalisation is widely used to describe and understand many worldwide phenomena. It?s given positive connotations by those who advocate greater economic integration across national borders, while it has been fiercely criticized by those who perceive it as a threat to social cohesion and as the advancement of unfettered capitalism. Many people refer to the adage ?Global Village or Global Pillage?, meaning that only those with wealth and power benefit from globalisation, while the poor get poorer. ...read more.

37) The expansion of world trade has sustained economic growth around the globe and led to a rapid expansion of employment opportunities. The International Labour Organization has estimated that between 1995 and 2005, thanks to this global expansion, 40 million additional jobs have been created every year in its member countries. Despite this dynamism within the labour market, decent working conditions have not improved at the same rate. On the one hand, organized labour argues that low-wage workers in developing countries will gain employment at the expense of American workers. On the other hand, self-appointed advocates of the developing world claim that trade with and investment from Western countries lead only to exploitation and continued poverty abroad. According to some studies, sustained wage growth over several years is normally only possible when the economy is expanding and when labour productivity is growing. One example is China, where real wages grew on average about 11 per cent per year thanks to double digit economic growth. Conversely, when GDP per capita declined in Argentina during the financial crisis in 2001?03, wages fell by an average of 11 per cent per year. Another way to look at the link between productivity and wages is to observe that the level of average wages is higher in countries in which labour productivity is higher. From a comparative perspective, it has been shown in various studies that international differences in wages across countries mainly reflect differences in economic development and labour productivity. The relationship between globalization and development is quite complex. First of all, openness to foreign trade is far from being the only or most important factor in fostering development - actually, trade is a small factor in the economy -, nor is globalization solely responsible for creating disparities between rich and poor. ...read more.

In other words, technology no longer delivers a competitive advantage; it becomes part of the business infrastructure, another cost of doing business. As a result there is more risk for organisations that pursue innovation through technology, which is becoming more diffuse, more ubiquitous and less of a differentiator in the marketplace. As the Blue Ocean strategy suggests it?s more effective for companies to create uncontested market space where the competition is irrelevant. One example of a company that succeeded in this field is an Australian wine company Yellow Tail. For two years it became the bestseller among imported wines in the US. The company decided not to compete head-on with major players, concentrate at non-customers, not customers and create new demand. The company?s strategy was to eliminate and reduce factors the industry has long competed on; and to raise and create factors the industry has never offered, by simultaneously pursuing differentiation and low cost ? at the heart of which is value innovation. This is how the company just in two years became market leader in the US. There are lots of other such companies that made significant innovations, like: Apple?s iPad, Samsung Galaxy, Southwest airlines, Swatch and Google Search. However, the time passes and the world and needs change. And the time comes when these companies become mature enough to think of their strategy in more profound and comprehensive manner to sustain or further accelerate their growth in the future. So the conclusion may be done, that process innovation is important, however not enough to gain ultimate advantage. So the company should engage in various processes at the same time to create value that will be far beyond its competitors? potential. ...read more.