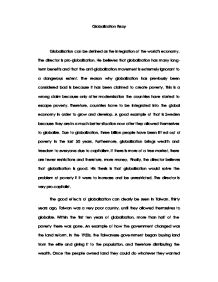 Globalization - discuss the integration of the worlds economy.

Globalization Essay Globalization can be defined as the integration of the world's economy. The director is pro-globalization. He believes that globalization has many long-term benefits and that the anti-globalization movement is extremely ignorant to a dangerous extent. The reason why globalization has previously been considered bad is because it has been claimed to create poverty. This is a wrong claim because only after modernization the countries have started to escape poverty. Therefore, countries have to be integrated into the global economy in order to grow and develop. A good example of that is Sweden because they are in a much better situation now after they allowed themselves to globalize. Due to globalization, three billion people have been lifted out of poverty in the last 50 years. Furthermore, globalization brings wealth and freedom to everyone due to capitalism. If there is more of a free market, there are fewer restrictions and therefore, more money. Finally, the director believes that globalization is good. His thesis is that globalization would solve the problem of poverty if it were to increase and be unrestricted. The director is very pro-capitalist. The good effects of globalization can clearly be seen in Taiwan. Thirty years ago, Taiwan was a very poor country, until they allowed themselves to globalize. Within the first ten years of globalization, more than half of the poverty there was gone. ...read more.

Another way in which the workers had their lives improved at Nike after globalization is financially. Nike pays about $54 per month for their workers which is a high salary for their standards and can be compared with the payment a teacher or doctor receives. This salary is also very high when compared to the minimum wage in the country which is of $15. The workers that work for Nike also have some other benefits such as healthcare subsided, free meals, commerce close to the factories, a park for workers to relax during breaks and restricted working hours. Many people left and came back. They preferred to work at Nike rather than at a farm because at the farms they had to work fourteen hours a day and it was not as clean and did not have food. Globalization has given people the chance to buy and decorate their own houses which would be unthinkable beforehand. Despite all that, anti-globalists have scary visions of the future for what multinationals must do. They fear the monopolies that they could create within a country. However, multinationals are actually less powerful because free trade controls them in a way because of competition. It is also those multinationals which are helping Vietnam get wealthy. For example, Nike gives micro loans to people who want to start businesses but that do not have the capital to do so. ...read more.

Another reason as to why Kenya should open itself up for globalization is because Taiwan used to be just as poor as Kenya, but now after their economic boom and their democracy, they are 20 times richer than Kenya. Therefore, it can be concluded that the director was proving a thesis that globalization is good and it would solve the problem of poverty if it were to increase and be unrestricted. The examples of three different areas have been given. These areas are Taiwan, Kenya and Vietnam. Taiwan used to be extremely poor until they opened themselves up for globalization and now they have been prospering a lot more. Vietnam is also receiving many new advantages by letting multinationals, such as Nike, into their economy and by adding a capitalistic economic system. Kenya, on the other hand, is still not part of this globalized society and a clear line can be marked between their economy and their lifestyle and the economy and lifestyle of countries that have allowed globalization into the system. The one area of products that Kenya is allowed to export to Europe, the flower business, plays a very important role in their economy and it would not be the same without it. Therefore, it can be concluded that globalization has been increasingly, and will continue to play an important role for countries that are under development. In order for them to grow and prosper, there needs to be a capitalistic system which is as un-restricted as possible. ...read more.