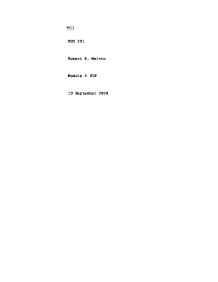 I believe that Iraq allowing foreign companies into its country to drill for oil will have a great impact on the global economy. First, it will help with the Iraqis national budget

TUI ECO 201 Robert P. Melvin Module 4 SLP 10 September 2009 Iraq is a country that is currently rebuilding after being set free from the rule of Saddam Hussein. I will talk about why I chose to write about Iraq. Also, I will discuss the recent article in the New York Times about allowing foreign oil companies to drill in Iraq for the first time. Finally I will discuss how Iraq allowing foreign oil companies on their land will affect the global countries. The main reason I chose to write about Iraq is that I am currently scheduled to deploy there in about two weeks. ...read more.

The Kurds are the group of people that in the 1980s were gassed by Saddam Hussein. Currently, Iraq ranks third in the world behind Saudi Arabia and Iran in the amount of oil reserves with 115 billion barrels, but the United States Department of Energy believes that ninety percent of Iraq has not been explored for oil and they estimate that another 100 billion barrels are yet to be discovered. Only around 2000 oil wells have been drill in Iraq compared to 1 million oil wells in Texas alone. In 2008, China's biggest oil company signed the first post-ivasion oil field development contract. ...read more.

In June, they signed a contract with the Chinese company and British petroleum for development deal in the Rumaila field. I believe that Iraq allowing foreign companies into its country to drill for oil will have a great impact on the global economy. First, it will helps with the Iraqi's national budget and allow for revenue to help rebuild the nation. Also, it will brings jobs to both the local Iraqis and the country of whatever buys the contract. Iraq's oil production charges are among the cheapest in the world. This will allow for the lower crude oil prices which will leads to lower gas prices. In conclusion, I believe that Iraq decision to allow foreign oil companies to drill is not only good for Iraq but will also benefit the global economy. http://en.wikipedia.org/wiki/Iraq http://www.nytimes.com/2009/09/06/world/middleeast/06iraqoil.html?pagewanted=1&_r=1 ...read more.