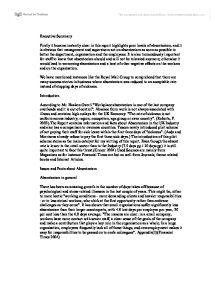 Impact and Cause of Absenteeism

Executive Summary Firstly it became instantly clear in this report highlights poor levels of absenteeism, and it is obvious that management and supervisors act on absenteeism as soon as possible to better the department, organisation and the employees. It is also tremendously important for staff to know that absenteeism should and will not be tolerated anymore; otherwise it would lead to worsening absenteeism and a host of other negative effects on the workers and on the organisation. We have mentioned instances like the Royal Mail Group to comprehend that there are many success stories in business where absenteeism was reduced to an acceptable rate instead of stopping days of sickness. Introduction According to Mr. Haakon Overli "Workplace absenteeism is one of the last company overheads and it is out of control". Absence from work is not always associated with illness and contains high outlays for the UK Economy. "The rate of sickness is not uniform across industry, region, occupation, age group or even country". (Roberts, P. 2003).The Report contains information and facts about Absenteeism in the UK Industry and also has a comparison to overseas countries. Tescos newly introduced pilot scheme of not paying their staff for sick leave within the first three days of "sickness". (Asda and Morrisons already refuse to pay the first three sick days.) The introduction of this pilot scheme stems as the main catalyst for my writing of this report. ...read more.

Motivation, Satisfaction and the morale of the employee are playing a big role for non-attendance. Dissatisfaction for instance due to excessive demand or because of non integration in the workplace group could also effect to absenteeism. The nature of work: Leadership and management style can be a big influence in the efficiency of the performance of staff. The style should be appropriate to the circumstances. Environmental Factors: An important factor could be the intensity of unemployment and the current national economy. If there is a high unemployment due to recession in the economy than probably the levels of absence may be low. A second external factor is the location of the workplace, the supporting infrastructure, and the ease of travel to and from the site. (Bolton, T. & Huges, S. 2001) Long Term versus Short Term Absence 89% of absence is short term. Even though, long term absence is the real problem. According to the PR Newswire "Every week approximately 3,000 people move from long-term sickness to ongoing incapacity benefit. Of the 2.7 million people now receiving incapacity benefit, only 30 people rejoin the workforce each week "Also 75% out of the average cost of sickness (�400 out of �476) per employee is for the long term absentee. (PR Newswire 2004) The top five causes of long duration absence Condition % Days of Four Weeks Absence or More Joint disorders/ arthritis 96.6% Surgery 77.5% Anxiety/Depression 75.6% Stress/Shock 73.4% Back pain 55.9% Source: IRS, (2003) ...read more.

2003). Companies, who using this model have already a decrease in absence. Absence on Sport Events Tesco claimed that absenteeism occurred more during sport events than on regular days. According to Financial Times "Companies can measure the way absence rates go up around popular sporting events and rates can be compared between employment sectors. Fact is that 49% of British workers are not allowed to watch sport events during work time. 1.4 Million Male workers were planning to skive for watching the World cup, which cost British firms �142 m in lost productivity and so on. (Western Mail 2002) CNN wrote: "Ultimately, if employees are given the choice to watch key matches it may result in reduced absenteeism and a more responsible approach to personal workloads."(Easen, N. 2004 ) Conclusion This report clearly shows that absent management is a necessary step for companies to take. It is apparent to conclude that absenteeism is relevant to all business areas, and it becomes harder to monitor as the business size grows. It is very important to understand the variety of causes of absence. Human Resource Department need to know what methods of reducing absenteeism are available to them and how to implement them. "Managing the risk rather than cutting pay or offering bonuses, though, is a much more effective solution to absenteeism", said Alan Aldridge, managing director of Active Health Partners. ...read more.