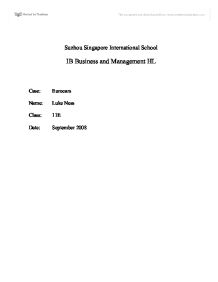 Is the business activity of Eurocars in the primary, secondary or tertiary sector? Explain your answer.

Suzhou Singapore International School IB Business and Management HL Case: Eurocars Name: Luke Ness Class: 11E Date: September 2008 Summary Due to the increase in imported car sales, Gina Wilson started Eurocars. She hired workers and bought cars to sell. The business expanded steadily, and they soon had many cars at home and in Europe. They started selling more to individuals than dealers due to a higher turnover. The problems with Eurocars are that manufacturers are slow to provide new cars, and there is a lot of administration work to be done and registration laws in place that make their work hard. ...read more.

Suggest examples of land, labour and capital that might be used by Eurocars. The only land resource Eurocars uses is the office they work out of. They do not produce anything so they don't use any natural resources. The labour used by Eurocars consists of Gina, who started and runs the business, and the people she hired. The capital used by Eurocars is the cars they buy then sell on. These cars are already manufactured, so they are not included in land. 3. Explain: 1. The type of market that Eurocars is operating in. Eurocars is operating in the consumer goods market, as they are selling durable goods (cars) ...read more.

Eurocars is affected by external factors such as the government and the producers of the cars they retail. They are affected by registration laws and other laws which hinder their work. There is also a lot of administration required as the cars have to be bought in Euros while Eurocars is based in Britain. The government, however, also affects them in a positive way, as they changed a law in order to increase competition in the sale of new cars, thus helping Eurocars. The producers of the cars also affect Eurocars. They are often late in producing a UK-speciification car, and the producers' promotions are forced onto Eurocars. All these things affect Eurocars to various degrees, while government factors feature heaviest they both help and hinder Eurocars, so it balances out eventually. ...read more.