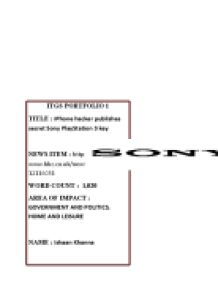 ITGS portfolio. What was the impact of the hacking of the Playstation 3?

﻿ITGS PORTFOLIO 1 TITLE : iPhone hacker publishes secret Sony PlayStation 3 key NEWS ITEM : http://www.bbc.co.uk/news/technology-12116051 WORD COUNT : 1,020 AREA OF IMPACT : GOVERNMENT AND POLITICS, HOME AND LEISURE NAME : Ishaan Khanna A: PRESENTATION OF THE ISSUE The PlayStation 3 is the third home video game console produced by Sony Computer Entertainment and the successor to the PlayStation 2 as part of the PlayStation series. The PlayStation 3 competes with Microsoft's Xbox 360 and Nintendo's Wii. Major features of the console include its unified online gaming service, the PlayStation Network, its robust multimedia capabilities, connectivity with the PlayStation Portable, and its use of the Blu-ray Disc as its primary storage medium. [Wikipedia.org] On January 22, 2010 a 21 year old hacker, George Hotz, successfully managed to ?jailbreak? or in other words gain access to the machine's system memory and processor. Four days later he released the exploit to the general public. On January 6, 2011 Mr. Hotz released the PS3's master key and published it online. This key (which was a major secret) ...read more.

PlayStation Jailbreak, often referred to as PS3 Jailbreak, was the first USB chipset that allows unauthorized code execution, such as homebrew, on the PlayStation 3. It bypasses a system security check using a memory exploit which occurs with USB devices that allows the execution of unsigned code. One of the most popular pieces of homebrew software used with the device is Backup Manager, which allows users to dump and then run games from the hard drive of the PlayStation 3, or from an external USB drive. Backup Manager can also be used to run homebrew applications that are created to run in native mode. [PSgroove.com] C: IMPACT OF THE ISSUE Game Developers lose revenue from pirated PlayStation 3 games, from current products as well as from future games. When a game is sold, most developers invest a portion of the revenue into future research and development into new game and physics engines. When a game is pirated, game developers lose revenue from the sale of their products, which hinders development of new games and stifles the growth of the company. ...read more.

3) Publishers will stay away from making big title games for the PlayStation 3 because they may not be able to guarantee returns on investment. The bottom line is when software is pirated; the developer(s) and publisher(s) would not receive compensation for their work. D: PROBLEMS & SOLUTIONS Problem With the use of programs such as "back-up managers" on custom or modified firmware, people can now store and run games stored on a hard drive. Thus allowing the sharing and playing of pirated games. Solution Sony should take steps to prevent further Jailbreaking of their devices by doing more Research and Development into strengthening their security. These new improvements could be sent in with a firmware update. For those users who do not update their firmware, Sony can always prevent the users from connecting to the PlayStation Network once the Network detects the use of pirated games on their system. The new firmware update could not only provide enhanced security but also some new features that would make the PlayStation experience a whole lot better thus making it more attractive for people to update. The new firmware could also add a feature that would verify with the PlayStation network that the PlayStation?s operating system has not been modified. ...read more.