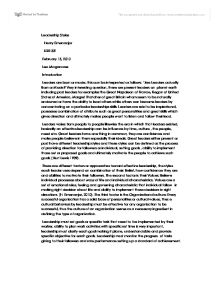 Leadership styles and analysis of my leadership skills.

Leadership Styles Henry Emenanjor LDR 531 February 15, 2010 Leo Maganares Introduction Leaders are born or made; this can be interpreted as follows: "Are Leaders actually Born or Made? Very interesting question, there are present leaders on planet earth including past leaders for examples the Great Napoleon of France, Regan of United States of America, Margret Thatcher of great Britain whom seem to be naturally endowed or have the ability to lead others while others can become leaders by concentrating on a particular leaderships skills. Leaders are said to be inspirational, possesses combination of attribute such as great personalities and great skills which gives direction and ultimately makes people want to listen and follow their lead. Leaders varies from people to people likewise the era in which that leaders existed, basically an effective leadership can be influence by time, culture , the people, need etc. Great leaders have one thing in common; they are confidence and make people believe in them especially their ideals. Great leaders either present or past have different leadership styles and these styles can be defined as the process of providing direction for followers or individual, setting goals , ability to implement those set or proposed goals and ultimately motivate the people to achieve such goals ( Kurt Lewis 1939). There are different factors or approaches toward effective leadership, the styles each leader uses depend on combination of their: Belief, how confidence they are and abilities to motivate their followers. The second factor is their Values: Believe individual processes about ways of life and individual characteristics. Values are a set of emotional rules, feeling and governing characteristic that individual follow in making right decision about life and ability to implement those decisions in right directions. (H. Emenanjor, 2010). The third factor is the Organizational culture: Every successful organization has a solid base of personalities or cultural values, these cultural behaviors by leadership must be effective for any organization to be successful, thus the culture of an organization serves as a necessary ingredient in defining the type of organization. ...read more.

His leadership style is considered as not been totally analytical as the task unfolds. The leadership of John F Kennedy can be compared to that of Fidel Castro of Cuba. The second leadership style will be Fidel Castro; he has extreme self confidence or what I call as overconfidence, very demanding, reward failures with punishment, likewise disobedient and with act of punishment, it makes it easier for his followers to be loyal to him base on fear. He is highly independent, don't really get followers involve in making decisions. He shows great courage in the present of adversity even when been sanction by the outside communities. He's willing to get harm regardless of the consequences in order to achieve is desire goals and objectives. He's self absorbed. His style of leadership is regarded or viewed as a tyrant. The effectiveness of substitutes for leadership is described as making a clear distinction between two kinds of leadership behaviors and these are: substitutes and the neutralizers. The effectiveness of the substitute's leadership makes leader behavior unnecessary and redundant (G.Yukl, 2006, P.225), they include any organizational characteristics which ensure that subordinates will understand their role clearly in execution of deliberated task, knowing how they function and are highly motivated. Neutralizers eradicate leaders' action by preventing them to act in a certain manner. Leadership substitute is focused on subordinate guidance in receiving task and also performance incentive from the leader (Howell and colleagues, 1990, P.23). The effectiveness in substitute leadership is the experience, having the ability, high skill level of those leaders and are professional oriented. In conclusion, effective leadership styles are dependent on various factors, the era or time of leaders is very important, the psychological need of the follower or nation becomes an effective tool in governing. Good leaders are very confidence in their action and words; this makes it easier for their followers to trust them. The strength of any good leadership is the ability to combine these leadership styles base on the need of the people and not just overly self ambition. ...read more.