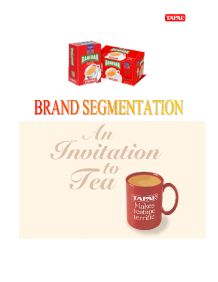 COMPANY INTRODUCTION Tapal a well known name in Pakistan, started its business in 1947 with their first shop in Joria Bazar. The journey of Tapal's remarkable success is the combined efforts of three dynamic generations of the Tapal Family. Making a modest beginning over half a century back, today Tapal has become the largest, 100% Pakistani owned Tea Company in the country. It has modern tea blending and packaging factories, warehouses and a team of highly dynamic professionals. Tapal has built itself on sound principles and practices where they consider their employees as their greatest asset. Tapal was the first one to introduce soft packs in the country and developed an entirely new brand category named Tapal Family Mixture, which was a combination of tea and dust. In 1997, Tapal was the first Pakistani Tea Company which was honored by the ISO-9001 certification followed by the ISO 9001/2000 certification in the year 2000. Tapal offers a wide range of variety in its products and enjoys as being a leader in the industry. BRANDS OF TAPAL Danedar Leaf Blend Pioneer of the Danedar category in Pakistan, Tapal Danedar remains a favorite around the country with its grape-nutty appearance, rich golden color and strong refreshing taste. In fact its popularity is such that other companies have launched their own versions of this blend, but Tapal's remains the original and ultimate Danedar because of its unique color, aroma and taste. Also available in double chamber tea bags, today Tapal Danedar enjoys the position of the "No.1 Tea Brand" in Pakistan Tapal Family Mixture A unique combination of high-grown Kenya leaf and dust tea, Tapal Family Mixture is the pride of Tapal. ...read more.

> Tetley Tea PERCEPTUAL MAPPING Perceptual mapping is a graphics technique used by marketers that attempts to visually display the perceptions of customers or potential customers. Typically the position of a product, product line, brand, or company is displayed relative to their competition.It is important for a company to understand how it is currently perceived relative to the rest of the competition. Perceptual mapping is commonly used in marketing research to understand a company's position in the marketplace. A perceptual map is a two-dimensional representation of the relationships among the competitive set and a group of attributes. It is a descriptive technique that looks at the current strengths and weaknesses of each company. We will do perceptual mapping of different brands of Tea and its product line with 2 dimensions as quality and price. COMPETITIVE STRATEGIES Tapal is a clear market leader in all over Pakistan. There is ample display in wide range of tea available under Tapal, who offers varying brands catering to different segments of society. Among these Tapal Danedar hold a leadership position not only within company but in country's market as a premium brand. Strengths Weaknesses * Has a wide range of variety among which Danedar and family mixture are the most famous. * Karachi's largest selling brands * Market has brand awareness * at times wrong positioning of brands (Tapal Safari Kenya leaf) Opportunities Threats * Can do research and development in Northern areas to capture their particular needs and market share. ...read more.

Therefore despite the fact that it uses a mass marketing approach it can easily be denoted that this product is catered to a particular segment. Even in its marketing approach for TAPAL, the product is presented in a different way for instance the teabags are targeted toward the upper high class, while soft packs and jar packs are targeted for middle and middle lower class. POSITIONING Positioning means the place the product occupies in consumers' minds relative to competing products, which are typically defined by consumers on the basis of important attributes and also Involves implanting the brand's unique benefits and differentiation in the customer mind. TAPAL caters to its customers by providing Tapal Danedar to more than 140,000 outlets in Pakistan, which include superstores, department stores, general stores, medical stores, paan walas, grocery stores, merchants, etc. Tapal Danedar uses a list of different variables such as its form, features, performance, conformance and services to position itself in the market. Tapal has also occupied a special place in the hearts and minds of it's consumes through media and events it organizes. Tapal says that * It tends to be thicker than other brands and contains no dust as it is the finest available blend being called as Danedar. * It tends to be lighter, smell is known to have its own distinctive aroma and its brightness tends to be relatively higher. Tapal's Danedar main feature for positioning is that, it is tea made of the "finest blend" available. The benefits offered by Tapal Danedar to its consumers are of "high quality and good taste". "Tapal Danedar, Aur Kiya chahiye!" ...read more.