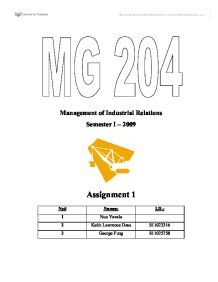 Management of Industrial Relations Semester I - 2009 Assignment 1 No# Names: I.D.: 1 Noa Yavala 2 Keith Lawrence Dass S11023316 3 George Fung S11025758 The Labor Market and Employment Relations Changes. This essay shall discuss the changes taking place in the labor market and employment relations in almost every country due to on-going globalization, technological revolution, management change and government reform policies. The issues covered in this essay are broken into three parts; the first part will touch on the trends in new employment and management practices and the benefits to the employers and employees. The second part will highlight the changes in employment relations and trade union movement due to management practices. Finally, the third part will talk on the reasons for which industrial disputes occur such as strikes and finally the conclusion of the essay summing up the body. The various emerging issues and trends in the South Pacific labor markets and employment relations are based on cases reported in published reports, the news media and online publications. They reveal that the new employment practice of an organization by the employers is adopting good management practices. The good management practices on managing the organization is by maintaining highly skilled people in full time employment and employing part-time / casual labors. ...read more.

The scope of collective bargaining is wider as the solutions for common problems can be found directly through negotiations between both the parties. And joint councils relates to the sharing of information & suggestion with regard to the issues of common interest including health, safety, welfare and productive efficiency. However, the collective bargaining process has been a channel through which the voices of workers are heard and their demands are given a chance of being met, this is said since individually concessions from management would be hard to come by-'United we stand, divided we fall'. The status of the trade union movement now days, generally does not seem all too positive, as trade union membership is declining. The trade unions mostly attract and fill its membership ranks with people who are low skilled and labourers who work full time. The trade union movement has not done itself much justice at all with its lackluster attempts in increasing union membership. Instead they have resorted to poaching members from a rival union this has resulted in unions spending more time fighting amongst each other rather than fighting for their members. Other reasons for the decline in trade unions, has been their inability to adapt to changing times. ...read more.

* Demand for higher social security benefits. * Demand for good and safer working conditions, including length of a working day, the interval and frequency of leisure and physical work environment. * Demand for improved labor welfare and other benefits. For example, adequate canteen, rest, recreation and accommodation facility, arrangements for travel to and from distant places, etc. * Workmen shall be entitled to wages for the period of strike, if it is found that the strike is neither illegal nor unjustified. A strike is valid if it does not violate any provision of the law. To conclude globalization has changed not just the way one looks at the workplace but how one also looks at society as a whole, not too long ago when one completed his or her studies that qualification would have allowed the worker employment only within their native country. Now with the coming of globalization ones' skills are internationally marketable allowing for a labour force that shifts from country to country resulting in a change in the composition of trade unions and a decline in its ranks. Added with the technological revolution, changes in management policies to the workplace, government reforms, increased female workforce, one can be certain that the evolution of employment relations will continue to change. ...read more.