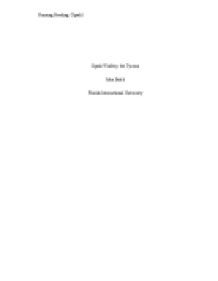 ﻿Running Heading: Oprah Oprah Winfrey, the Tycoon John Balck Florida International University Oprah Oprah Gail Winfrey, originally named "Orpah" after the biblical character in the Book of Ruth was born on January 29, 1954 in rural Mississippi. She is among many things a talk show host, actress, producer and philanthropist and best known for her self-titled, multi-award-winning talk show. Oprah was born into poverty in rural Mississippi to a teenage single mother and later raised in an inner-city Milwaukee neighborhood. She experienced significant hardship during her childhood and claims to have been raped at age nine and becoming pregnant at 14; her son died in infancy. She was sent to live with her father Vernon, a barber in Tennessee; he was strict but encouraging and made her education a priority. Winfrey became an honors student and won an oratory contest which gave her a full scholarship to Tennessee State University, where she majored in Speech Communications and Performing Arts (Wikipedia, 2012). According to Wikipedia, her first job in the communication industry was during high school and her first two years of college doing the news part time for WVOL, a local black radio station; she also began co-anchoring the local evening news at WLAC at the age of 19, making her the youngest news anchor and the first black female news anchor at that station. In 1976 she moved to Baltimore's WJZ-TV to co-anchor the six o'clock news and was then recruited to co-host WJZ's local ...read more.

Winfrey has also co-authored five books, at the announcement of a weight loss book in 2005, co-authored with Bob Greene, it was said that her undisclosed advance fee had broken the record for the world's highest book advance fee. Rankings Born in rural poverty, Winfrey became a millionaire at age 32 when her talk show went national. At age 41, she had a net worth of $340 million and replaced Bill Cosby as the only African American on the Forbes 400. Winfrey has also been the only African American to rank among America's 400 richest people practically every year since 1995. She has been ranked the richest African American of the 20th century and was for a time the world's only black billionaire. Her multiple achievements have earned her many worldwide, national and historic rankings. She has been called numerous times ?the world?s most powerful woman?, ?the most influential woman in the world? by organizations such as CNN, Time, American Spectator, Life, USA Today, among others. She also appeared on TIME?s ?Most Influential People" from 2004 to 2011 and is the only person in the world to have done so on all eight occasions. In 2005 she became the first black person listed by Business Week as one of America's 50 most generous philanthropists, having given an estimated $303 million as of 2007. In 2010 Life magazine named Winfrey one of the 100 people who changed the world, alongside such luminaries as Jesus Christ, Buddha, The Beatles, Cleopatra and Madame Marie Curie, she was also the only living woman to make the list. ...read more.

Winfrey was the recipient of the first Bob Hope Humanitarian Award at the 2002 Emmy Awards for services to television and film (Wikipedia, 2012). Winfrey has also invested $40 million in establishing the Oprah Winfrey Leadership Academy for Girls in Henley on Klip south of Johannesburg, South Africa, which opened its doors on January 2007 (Kelley, 2011). The school features state-of-the-art classrooms, laboratories, a library, theatre and beauty salon. Oprah, who has no surviving biological children, has described maternal feelings towards the girls at the Academy and also ensures that she is involved regularly by teaching a class at the school via satellite (Wikipedia, 2012). Oprah?s story is one of true leadership; her fame is not about her secrets, drama, or dirty laundry, it is about how she managed to create and enormous influence and how she uses that influence everyday in every decision to make a positive impact. Her power goes beyond her TV show; she is a true businesswoman and philanthropist and was able to transform herself into a motivator and teacher who channeled her gifts, energy, discipline and experience to help herself and others find the path to a life of decency and respect. She leads from the heart and uses her own experience, including setbacks and mistakes to strengthen and motivate others. Leaders from all walks of life have a great deal to learn from her. While honesty and emotional openness are risky, they are far less so than deceit, especially in an era of growing transparency. ...read more.