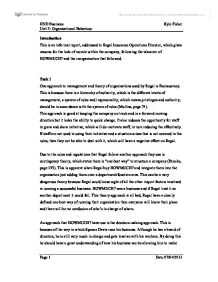 Introduction This is an informal report, addressed to Regal Insurance Operations Director, which gives reasons for the lack of morale within the company, following the takeover of HOWMUCH? and the reorganisation that followed. Task 1 One approach to management and theory of organisations used by Regal is Bureaucracy. This is because there is a hierarchy of authority, which is the different levels of management, a system of rules and impersonality, which means privileges and authority, should be in accordance with the system of rules (Mullins, page 74). This approach is good at keeping the company on track and in a forward moving direction but it lacks the ability to quick change. It also reduces the opportunity for staff to grow and show initiative, which will de-motivate staff, in turn reducing the effectively. If staff are not used to using their initiative and a situation arises that is not covered in the rules, then they not be able to deal with it, which will have a negative effect on Regal. Due to the rules and regulations that Regal follow another approach they use is contingency theory, which states there is "one best way" to structure a company (Brooks, page 133). This is apparent when Regal buy HOWMUCH? and integrate them into the organisation just adding them onto a department/function area. This can be a very dangerous theory because Regal could loose sight of all the other import factors involved in running a successful business. HOWMUCH? was a business and if Regal treat it as another department it could fail. ...read more.

due to the de-motivation of staff. The merger will not only have an effect on HOWMUCH?'s staff but also on Regal's, not in the same way though. Regal's staff will not have to deal with the change in rules, but they might get de-motivated if they feel that Regal has bought HOWMUCH? because they are not could enough. It is also apparent that the do not like the new managers and staff, which suggests their culture is like a tight community. This will make it even harder for HOWMUCH?'s staff to adapt. Task 5 Maslow's hierarchy of needs suggests that all humans have five basic needs, which are: > Physiological needs - these are the very basic needs, such as food and shelter, which you get from earning money through work. > Safety needs - this security, predictability and safety from threat, which also comes purely just from have a steady job. This would have been a threat for some staff when the takeover happened because they might of felt like they were going to loose their jobs. > Social Needs - this is the need of social interaction, friendship, affection or a sense of belonging. This is apparent in HOWMUCH?'s culture with the way in which teams work together to meet targets. This is not the case with Regal seeing as people are leaving and outside workers are now coming in making it harder to make lasting bonds with others; although with the long term staff it could be possible that there was a very strong bond between workers before the changes > Esteem needs - this is the need to be recognised, to have status and respect from others. ...read more.

Another possible reason for the problems being face by Regal is the formality of the group. If the group is used to being informal; where they are all 'mates' and get satisfaction out of the social aspect, and the new manager wants to run the group in a formal way, the staff are not going to like the change and will resent the new manager. A possible way around this is for Regal to ensure that all changes made by managers need to be done slowly to ensure a smoother transition period for the staff. Task 8 The use of technology across the organisation could help team functioning by allowing groups of the organisation to communicate easier with other groups allowing all members of the business to know what is happening. This may speed up decision making and which help the business and benefit the customers. Anything that speeds up processes in a company, cuts prices which will benefit customers. Not only will technology speed up communication it may also give staff a new way of interacting with each other, maybe with staff members they have never interacted with before, such as through intranets. Although technology could help team functioning, it could also hinder it. It could reduce the amount of close contact staff have with each other reduce the chance of making bonds with each other, which will reduce the effectiveness of teamwork, because staff wont know how to work with each other. This could reduce productivity meaning customers will not benefit in anyway. ...read more.