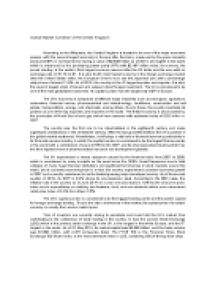 Overall Market Condition of the UK

ï»¿Overall Market Condition of the United Kingdom According to the Wikipedia, the United Kingdom is treated to be one of the major economic powers, with the second largest economy in Europe after Germany, measured by the gross domestic product (GDP) in nominal terms having a value of $2.828 trillion as of 2014, and eighth in the world which is measured by the purchasing power parity (PPI) with $2.497 trillion value. Its currency, the pound sterling, is the world’s third largest currency reserve after the US dollar and the euro with an exchange rate of £1.70 to $1. It is also fourth most traded currency in the foreign exchange market after the United States dollar, the European Union’s euro and the Japanese yen, with a percentage daily share of almost 11.8%. ...read more.

The country was the first one to be industrialized in the eighteenth century and made significant contributions in the nineteenth century. After the two great World Wars the UK?s position in the global market weakened. Nonetheless, it still plays a vital role in the world economy particularly in its financial service industry in which the capital London is considered to be the largest finance center in the world with a contribution of around 78% for the GDP, and its pharmaceutical industry which has the third highest share of pharmaceutical research and development globally. The UK experienced a severe recession caused by the financial crisis from 2007 to 2008, which is considered by many analysts as the worst since the 1930?s Great Depression due to total collapse of many huge financial institutions and significant fall of prices in stock markets around the world, and is currently recovering from it. ...read more.