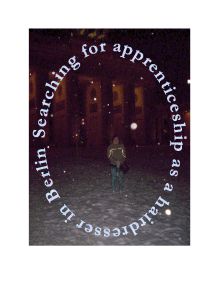 Searching for appreticeship in Berlin

The next morning we were going to see a museum, and grabbed a bite of food on the way. We hadn't expected that the museum was a waist of time, so when the clock rounded 4, we were in a hurry and went into the place where I was going to search for apprenticeship. We went into a coffee bar and got a drink, so I could loose my nerves and write the addresses on the applications. And then we went out to find the hairdressers, but it wasn't that easy as we had expected, even though we had a map, it was very difficult to find them. We asked for help but didn't get much, but finally we found one of them and went inside. ...read more.

They told me they would give me a call and I went out of there happily. My aunt and I found another hairdresser where I went in, but they told me they couldn't have me because they had so many people at the time, and showed me to another salon in the same company and I went in there, and they told me they would call me too. When we got out of there, was the clock about 7 and we thought that the most hairdresser had closed or were about to, so we went into a shopping center to look and shop. At Sunday, January 10. We had finished the weekend and were going back home. Experienced and written by: Maria Svensson January 2010 ...read more.