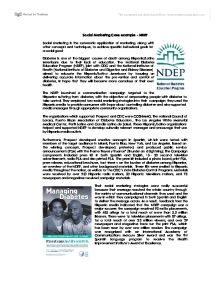 Social Marketing Case example - NDEP Social marketing is the systematic application of marketing, along with other concepts and techniques, to achieve specific behavioral goals for a social good Diabetes is one of the biggest causes of death among Hispanic/Latino Americans due to their lack of education. The National Diabetes Education Program (NDEP), joint with CDC and the National Institutes of Health (National Institute of Diabetes and Digestive and Kidney Diseases) aimed to educate the Hispanic/Latino Americans by focusing on delivering accurate information about the prevention and control of diabetes, in hope that they will become more conscious of their own health. ...read more.

These Hispanic/Latino organizations helped and supported NDEP to develop culturally relevant messages and encourage their use by Hispanic media outlets. Furthermore, Prospect developed creative concepts in Spanish, which were tested with members of the target audience in Miami, Puerto Rico, New York, and Los Angeles. Based on the winning concepts, Prospect developed, pretested, and produced public service announcements (PSA) with the theme "Rayos y Truenos" (Thunder and Lightning). The Campaign components included press kit in both Spanish and English, 15- 30 second television advertisements, radio PSA and also printed PSA. The press kit included a photo board, print PSA, press release, educational brochures, fact sheets on the burden of diabetes among Hispanics, an overview of the NDEP, and other background materials. ...read more.

As a result, feedback from the Hispanic media indicated that the NDEP campaign was a major success; the campaign received 95 radio placements, with 485 airings for a total reach of more than 5.5 million listeners. There were 16 television placements with 87 airings, for a total reach of over 3.3 million viewers, and over 29 newspapers and magazines have run the print PSA, which has been seen by over one million readers. The campaign was recognized with an International Academy of Communications Mercury Silver Award and was the first Spanish language program to receive the Health Improvement Institute's Award of Excellence. (The campaign poster) ...read more.