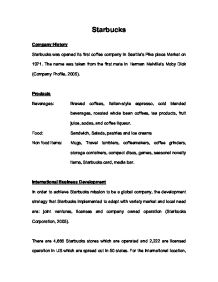 Teahouse: China is a tea country with a long history of daily tea-drinking, especially for the elder's generation, which prefers to drink tea on different occasions and during different time periods throughout the day. The teahouse is a very popular social venue for Chinese people. It is part of the food culture, with a history spanning many centuries. It is still an important part of people's social life. Since China promoted the open-door strategy to embrace more western culture and lifestyle, the tea house's domination has been challenged by the foreign coffee house. Coffee houses have gained popularity in China especially in the big cities like Beijing, Shanghai, Guangzhou and seashore communities. Technological Factors Technology is vital for competitive advantage, and is a major driver of globalization. The number of internet subscribers is expected to pass the 80mn mark in 2005, from around 65mn in 2005. However the low penetration rate, at just 5% in 2004, suggests there is still a way to go. PC penetration is 4.3% nationwide, but is forecast to reach 8.3% in 2008, although it is much higher already in some areas. For example, household PC penetration is about 60% in Shanghai. The number of broadband subscribers was about 11mn in 2004, and is expected to more than triple over the forecast period. In fact, Taiwan Starbucks launched on go card in 2002, which is a prepaid card and it offer customers discount and special gifts if they use the card frequently. This is quite popular with the local customers. The Strategies in China Since Chinese government have implemented the significant reform and opening policy to outside world, China achieved the enormous increase in economy. Meanwhile, lots of foreign corporations were attracted by its significant changes and took investment in succession. Starbucks was one of them who chose China as their target market in 1999. Considering differences between Chinese consuming habits and Westerner's, Starbucks adopted Chinese-characterized marketing strategies in four main areas, namely production, price, place and promotion. ...read more.

First of all, the company would employ employees who are appropriate in the service job. They could be friendly, polite and patient. Moreover, the company has to provide the knowledge about products and services to new employees. Developments of service system are finally necessary point. For instance, the responsibilities of employee could be divided exactly, the stores might use machines to save time of production, and the service might change to full-service. This solution would significantly increase sales in China because it is adapted properly with Chinese's consumer behavior. 4. Plant coffee bean and use materials in local country In china, this action plan is highly recommended. Two possible explanations could be given. On the one hand, China is the most labor-abundant country in this globe. Therefore, Starbucks could save the cost by paying a much lower salary than in other country, such Japan, Korea, and Singapore. On the other hand, China' developments is fast than most other country. Also, the standards of people' lives rise rapidly, the quality of life has been paid more attention on. As a result, the numbers of consumer are becoming higher. Therefore, it is important for Starbucks to provide adequate products and service to meet the higher customers' needs. 5. Introduce Vending Machine According to the number of vending machines has developed rapidly in China since 1999. By 2004 vending had had grown immensely in China ("Vending in," 2005) China is the most dynamic market with CAGRs of 18% ("Vending in," 2005). Focus on teenagers and young adults who crazy with vending machines in China. Moreover, Chinese have the world biggest population. This is the opportunity to get huge sales volume. Furthermore, the Chinese living style has changed. In the past China was close country but now it gradually developed and explores the country to the world. In addition, Chinese absorb western culture quickly. People lifestyle is very busy especially in business area such as Shanghai, Guangzhou and Beijing. Consequently, launching coffee vending machines can be well responded from Chinese because it convenient, quick and save time. ...read more.