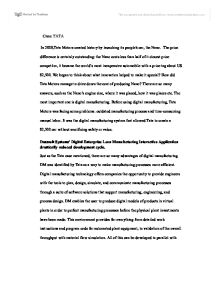 Case: TATA In 2008,Tata Motors created history by launching its people's car, the Nano. The price difference is certainly outstanding: the Nano costs less than half of it closest price competitor, it became the world's most inexpensive automobile with a price tag about US $2,500. We began to think about what innovation helped to make it special? How did Tata Motors manage to drive down the cost of producing Nano? There are so many answers, such as the Nano's engine size, where it was placed, how it was places etc. The most important one is digital manufacturing. Before using digital manufacturing, Tata Motors was facing some problems: outdated manufacturing process and time-consuming manual labor. It was the digital manufacturing system that allowed Tata to create a $2,500 car without sacrificing safety or value. Dassault Systems' Digital Enterprise Lean Manufacturing Interactive Application drastically reduced development cycle. ...read more.

As the case stated"Companies using digital manufacturing can model products and operations and make changes to them on the computer." Just think about the assembly-line, we can understand the DM is easing retrofit pains at the assembly-line level. There are a lot of benefits from DM. For example, it costs a lot of money to make a physical prototype. And, after you've made it, you might find that changes need to be made. In physical world, the costs of making those changes could prove quite expensive, particularly if the facilities are very large. Earlier; only after prototypes were made did people realize that they had overlooked some practical problems. Maybe it was an operator who could not reach or see a part comfortably while assembling. But it was too late to do anything then. Now, they are able to figure out such problems at the desktop and take corrective measures. ...read more.

on a motorcycle)."I observed families riding on two-wheelers, the father driving the scooter, his young kid standing in front of him, his wife seated behind him holding a little baby. It led me to wonder whether one could conceive of a safe, affordable, all-weather form of transport for such a family" (interviewed sentence of Tata Group Chief Ratan Tata in the Indian Express). Organizations must think like a customer to decide what the customer wants. Only when it does so, it can offer products at the right time at the right place ant the right price to its customers DM improves operation efficiency as an excellent tool to help justify investments in capital-intensive equipment and technologies to senior management. Management used to implement something without understanding the whole picture. Because of this they'd run up against un-anticipated problems. Now it's possible to make five different proposals based on simulated scenarios and the management would select the best one. ?? ?? ?? ?? ...read more.