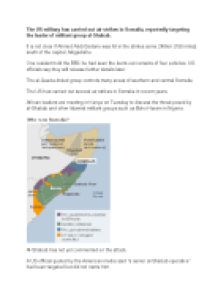 ﻿The US military has carried out air strikes in Somalia, reportedly targeting the leader of militant group al-Shabab. It is not clear if Ahmed Abdi Godane was hit in the strikes some 240km (150 miles) south of the capital, Mogadishu. One resident told the BBC he had seen the burnt-out remains of four vehicles. US officials say they will release further details later. The al-Qaeda-linked group controls many areas of southern and central Somalia. The US has carried out several air strikes in Somalia in recent years. African leaders are meeting in Kenya on Tuesday to discuss the threat posed by al-Shabab and other Islamist militant groups such as Boko Haram in Nigeria. ...read more.

Residents of Hawai village, some 240km south of the capital, Mogadishu, say they heard three loud explosions and then saw thick black smoke rising. One resident told the BBC he had seen the burnt-out remains of a car and three trucks but al-Shabab fighters prevented him from seeing if there were any bodies inside. line The US Rewards for Justice programme issued this photograph of him in 2012 * Seen as al-Shabab's chief ideologue and spiritual leader * Comes from Somalia's northern breakaway region of Somaliland * Also known as Mukhtar Abu Zubair * Studied in Sudan and Pakistan, where he became radicalised * Said to have fought in Afghanistan * Reputed to be a good orator and poet * Helped form al-Shabab after a ...read more.

Al-Shabab militants on Sunday unsuccessfully tried to free other extremists held in a Mogadishu detention centre Somali officials said all of the attackers, as well as three government soldiers and two civilians, were killed. The Pentagon and the US state department have supported the AU force that has driven al-Shabab from their former strongholds in the capital and some other urban centres since 2011. The militants continue to carry out bombings and assassinations in Mogadishu. Al-Shabab fighters want to overthrow the internationally supported Somali government and frequently attack government targets as well as neighbouring countries that provide troops to the AU force. The group said it carried out last year's attack on the Westgate mall in the Kenyan capital, Nairobi, in which at least 67 people were killed. ...read more.