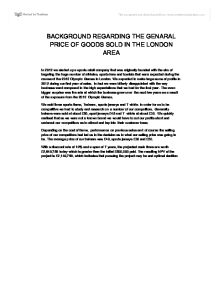 BACKGROUND REGARDING THE GENARAL PRICE OF GOODS SOLD IN THE LONDON AREA In 2012 we started up a sports retail company that was originally founded with the aim of targeting the huge number of athletes, sports fans and tourists that were expected during the course of the 2012 Olympic Games in London. We expected to make large sums of profits in 2012 during our first year of sales. In fact we were bitterly disappointed with the way business went compared to the high expectations that we had for the first year. The even bigger surprise was the rate at which the business grew over the next few years as a result of the exposure from the 2012 Olympic Games. ...read more.

Depending on the cost of items, performance on previous sales and of course the selling price of our competitors had led us to the decision as to what our selling price was going to be. The average price of our trainers was �40, sports jerseys �30 and �20. With a discount rate of 10% and a span of 7 years, the projected cash flows are worth �2,649,758 today which is greater than the initial �500,000 paid. The resulting NPV of the project is �2,149,758, which indicates that pursuing the project may be and optimal decition. RECOMMENDATIONS AND CONCLUSION As was mentioned in the general background, are company targeted sports fans and tourists that were expected during the course of the 2012 Olympic Games in London. ...read more.

The gamble played off and sales profits were enormous, significantly more than previous years. Profits in the last year 2018 were even greater than 2017 with total sales of �4.6 million. The rate at which the business is growing is very fast and steady, and at this rate Olympic sports Asseccories Ltd will be one of the most successful and recognised sports Retail Company in the London area. They are already so successful, but for even greater success and profits I would recommend that the shop being in such a busy location should be opened for longer hours and also for at least 6 hours on a Sunday. I would also suggest that 2 or 3 more sports items should be introduced to the sales line for 2019 and the company will surely make bigger profits. ...read more.