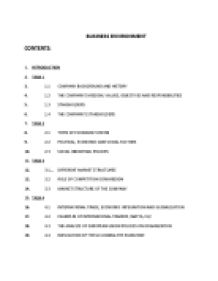 The Business Environment of Coca Cola

﻿BUSINESS ENVIRONMENT CONTENTS: 1. INTRODUCTION 2. TASK 1 3. 1.1 COMPANY BACKGROUND AND HISTORY 4. 1.2 THE COMPANY?S MISSION, VALUES, OBJECTIVES AND RESPONSIBILITIES 5. 1.3 STAKEHOLDERS 6. 1.4 THE COMPANY?S STAKEHOLDERS 7. TASK 2 8. 2.1 TYPES OF ECONOMIC SYSTEM 9. 2.2 POLITICAL, ECONOMIC AND SOCIAL FACTORS 10. 2.3 SOCIAL INDUSTRIAL POLICIES 11. TASK 3 12. 3.1 _ DIFFERENT MARKET STRUCTURES 13. 3.2 ROLE OF COMPETITION COMMISSION 14. 3.3 MARKET STRUCTURE OF THE COMPANY 15. TASK 4 16. 4.1 INTERNATIONAL TRADE, ECONOMIC INTEGRATION AND GLOBALIZATION 17. 4.2. EXAMPLES OF INTERNATIONAL TRADERS /NAFTA, EU/ 18. 4.3 THE ANALYZE OF EUROPEAN UNION POLICIES ON ORGANIZATION 19. 4.4 IMPLICATION OF THE UK JOINING THE EUROZONE ________________ INTRODUCTION Business environment consists of the factors that affect company?s operations, and includes stakeholders, suppliers, customers, competitors, industry trends, regulations, government activities, economic and social factors, and technological development. Ability to understand the key processes of business environment is severe necessity. Business environment is same as Charles Darwin?s natural selection: ability to adapt to changes in an environment ? a main condition in business. The number and a variety of factors to which the organisation is forced to react, is a lot. All the objects and processes in environment always changes. Change of one factor results to a change of set of others. The organisation has very limited possibilities to influence an external context of the activity. The companies should adapt continuously for changes proceeding round them, i.e. to be changed. ________________ TASK 1 1.1 - COMPANY BACKGROUND AND HISTORY The company that was chosen has the most expensive brand name in the world. This is ?The Coca Cola Company?. It is the largest beverage company, largest manufacturer, distributor and the marketer of the non-alcoholic beverage concentrates in the world. The Coca Cola Company markets four of world?s top five soft drinks brands, including Coca-Cola, Fanta, Sprite and Diet Coke. ...read more.

Some of the profit made by the Coca Cola Company is given to the government. But if the government raises the tax, the company has to raise their price too, so they don?t lose any money. Economic factors for Coca-Cola: Economic factors highly affect the Coca Cola?s resolutions. If the economic condition of the country is not strong the price of the products must be not high. Otherwise it will impact negative in the Coca Cola Company?s productions. Also the inflation, recession and few other factors will affect the company. For example, in 2001 bottling and distributing franchise of the Coca Cola Company was opened in Mongolia. In the present time MCS Coca Cola Company employs over 300 people. Comparing this to the whole population, it is not small number. In addition, in Mongolia the prices of the products are less comparing to the high-developed countries. The main reasons are the population of the country, the inflation and the economic conditions. Social factors for Coca-Cola: The Coca Cola Company has more than 2800 products in over 200 countries. The main products of the company are Coca-Cola, Fanta and Sprite. The company produces new types of drinks after making researches in local areas. All social factors influenced on becoming the number one non-alcoholic beverage company. For example, many people in the world are choosing healthier lifestyles. This affected the Coca Cola Company to produce sugar free drinks, like Diet Coke, Coke Zero and bottled waters. 2.3 ? SOCIAL AND INDUSTRIAL POLICIES Social welfare For the Coca Cola Company the economic, environmental and social implications are more important than ever. The strength and sustainability of the most recognized brands are directly related to the social license to operate, which the company must earn daily by keeping their promises to the customers, consumers, associates, investors, communities and partners. Live positively? is the company?s commitment to making difference in the world. ...read more.

As one of the largest users of packaging in Great Britain, the company needs to reduce the environmental impact of their packaging: * Reducing the weight of packaging * Using recycled contents in packaging * Using recyclable materials * Recycling the waste created during the production * Encouraging consumers to recycle There are few examples of reducing weight of packaging. The weight of 500ml polyethylene terephthalate (PET) bottle is now weighs just 26 grams, down from 39 grams in 1994. The classic 330 ml glass bottle?s weight has reduced from 263g to 210g, made it 20% lighter, slightly shorter and more impact-resistant. The average weight of cans has been reduced by about 30% since 1987. Glass bottles contain an average of 30% recycled glass and our aluminium cans contain around 50% recycled aluminium. As well as reducing the amount of raw materials, this also saves considerable energy. 4.4 ? IMPLICATION OF THE UK JOINING THE EUROZONE Most of the British citizens are against to have the same currency with Eurozone. But it is better for the businessmen, because of a negative influence of global financial crisis. There are few examples of advantages and disadvantages of the UK joining Eurozone. If the UK joins the Eurozone, all the businesses will be affected. With Euro, it will be possible to compare prices for the same goods or services in different Eurozone countries. It will also help companies to know their competitors price. With the Euro, it will be easier and cheaper to find and to work with new suppliers outside home market. If not joining the Eurozone, UK hopes to play a leading role in the EU also UK has the freedom to manipulate its own exchange rate as a safety valve in times of depression. Vending machines, coin machines, ATMs will all have to be changed or replaced. UK at the moment is deeply divided over the Euro issue. It is a too difficult and complicated issue to be tackled alone. Economists and decision scientists should work together to analyze the impact of UK Euro membership in a systematic way. ...read more.